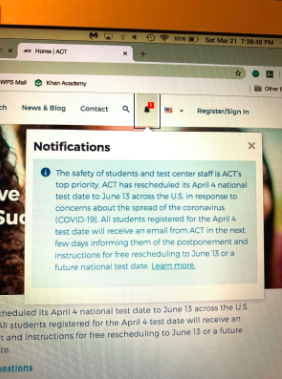 Multiple standardized testing dates have been cancelled in test centers across the country due to the COVID-19 outbreak, and many are not planned to reschedule.

Multiple standardized testing dates have been cancelled in test centers across the country due to the COVID-19 outbreak, and many are not planned to reschedule.

These cancelled tests include Connecticut’s in-school March SAT, the April ACT, March SAT and May SAT. The April ACT, the only test rescheduled so far, has been postponed to June 13.

After months of preparation, many students are forced to wait another couple of months to take their test.

“Because of the cancellation, I now have to study for two more months,” Savannah Schaefer ’21 said. “I have to continue with tutoring and practice tests when I shouldn’t have to.”

Prior to officially cancelling the April ACT, the ACT website posted a note to all students on March 13, warning them about a possible cancellation in the future.

“ACT continues to closely monitor the situation regarding the coronavirus (COVID-19),” it read. “ACT is consulting with local government and school officials to make the appropriate decisions.”

In addition to the ACT website, the College Board also posted about this issue, regarding how they would handle the cancellations of the March and May SAT tests.

“We… will continue to assess its status, with the health and safety of students and educators as our top priority,” the website states. “We are also exploring the possibility of adding an international SAT administration later this school year.”

The cancellations have also raised fiscal concerns for students.

“I had been studying so hard for the March SAT and now I feel like all that time and money was wasted,” Kylie Race ’21 said. “I don’t know when I’m gonna end up taking it, so it’s really stressful to feel like I need to stay prepared indefinitely.”

The test center closings come after government recommendations to close group gatherings, which have led over 45 schools to close, according to Education Week, affecting at least 53.7 million students.

“Non-essential businesses or not-for-profit entities shall reduce their in-person workforces at any workplace locations by 100% not later than March 23, 2020 at 8:00 p.m,” the executive order stated.

Students who planned to take the cancelled standardized tests are offered a free rescheduling for future dates, most likely in June.

“I was expecting April to be my last test,” Schaefer said. “It’s just a huge disappointment.”