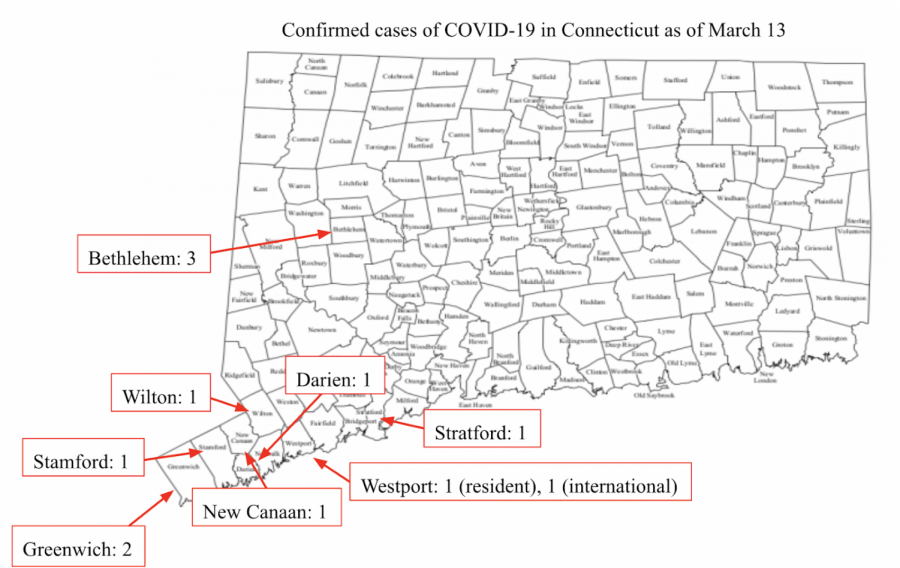 Westport’s first two official cases of the coronavirus were declared Friday, bringing the total number of infected Connecticut residents to 11..

Westport’s first two official cases of COVID-19 were declared Friday, according to Mark Cooper, director of the Westport Weston Health District (WWHD) and the Hartford Courant.

The confirmations marked the sixth and 11th cases of COVID-19 in Connecticut. First Selectman Jim Marpe said the individual who contracted the virus first—not being a Westport resident—attended a private party in Westport on March 5, where he was believed to have exposed 40 other people to the virus. Fourteen people who attended the party reported to be experiencing flu-like symptoms later in the week.

The second case, a woman in her 40s, was confirmed a few hours subsequent to the first announcement.

“To mitigate the spread, it is imperative that every day and everywhere people diligently practice the simple and effective control measures of washing hands, not touching your face and covering coughs or sneezes, until the virus runs its course,” Marpe wrote in an email Thursday. “If you want to reduce exposure, you should use discretion if going out, particularly if you will be in a large group of people.”

With the confirmed presence of COVID-19 in the town, Caroline Coffey ’22 believes that Westport will face increasing restrictions in an attempt to mitigate the epidemic.

“Given the national response to the pandemic, the town will face the implications of the trickle-down effect. I wouldn’t be surprised to see temporarily closed storefronts, or the cancelation of community events in the nearby future,” she said.

Several public areas throughout Westport have already been closed out of an abundance of caution. These include the Westport Public Library, the Westport Center for Senior Activities, the Westport-Weston YMCA and temporarily, Town Hall.

On Wednesday, the WWHD received its first batch of 40 testing kits and began limited testing Thursday on patients exposed to COVID-19 the previous week. Cooper stated that results take approximately three to five days to be returned from the laboratory in California. The WWHD currently holds a waiting list from which it will draw names once the next batch of 40 testing kits arrives.

According to an update from the Hartford Courant, as of Friday, 136 patients in Connecticut have been tested for the virus, including 56 in Fairfield County.

Cooper also emphasized how critical it is that the community of Westport take the epidemic seriously and follow all precautionary guidelines that town and state officials have released.

“The intent of closing schools, business offices and other places people congregate is to prevent, or at least slow down, the spread of the highly transmissible COVID-19,” Cooper wrote in a WWHD update. “The school and other cancelations should not be viewed as a holiday and a time for partying and celebration. They are closed to facilitate voluntary social isolation which is an important tool in lowering the chance of exposure to an infectious disease.”