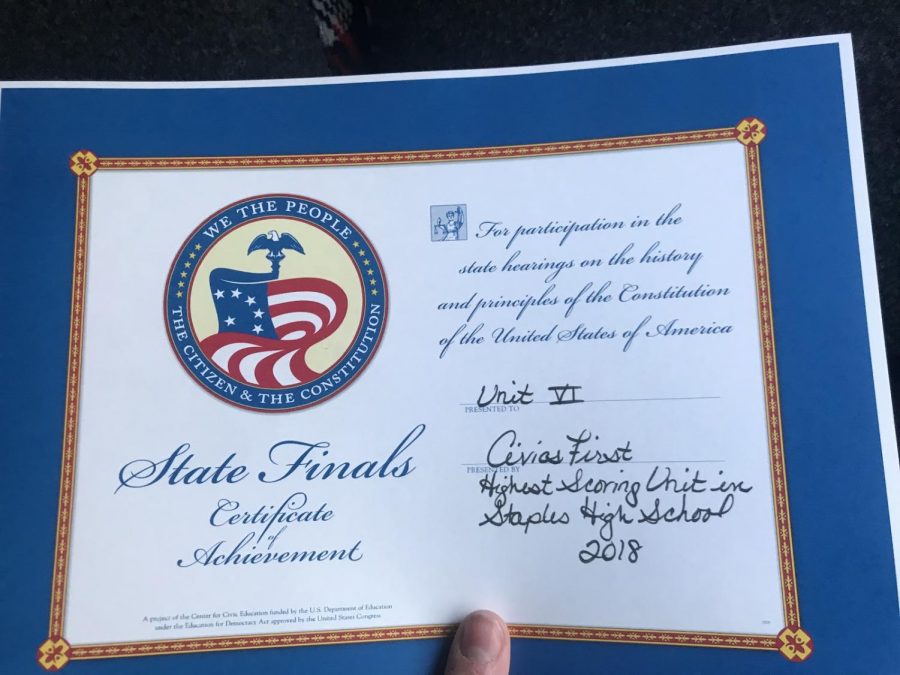 The annual We the People competition usually takes place in Washington D.C. but will not be happening due to the COVID-19 outbreak.

The national We the People and Science Olympiad competitions had their plans altered due to the persistent spread of COVID-19.

The We the People national competition was supposed to be held in Washington D.C. from April 24-27 and was cancelled on March 12. The Staples We the People team received first place in the state competition in December and had already begun preparing for nationals.

“It is with immense disappointment that I forward this email to you,” Suzanne Kammerman, teacher of the AP Government and We the People class wrote to her students of the cancellation. “I know you all put your heart and soul into this and that you were all looking forward to our trip.”

The We the People competition organizers are working to arrange a virtual competition consisting of videos of each of the participating teams.

The Connecticut Science Olympiad state competitions for both middle and high schoolers have been postponed until further notice due to the virus outbreak, according to the official website.

“When we were all notified, many members of the team, including myself, were very disappointed at the cancellation of the National tournament,” Sam Powell ’21, captain of the Science Olympiad team said. “As reigning state champions, we wanted to go back and compete at this level.”

The cancellation and postponement of these two school competitions has upset many students who have spent hours preparing to compete.

“I was deeply saddened that our efforts towards the state and national competition will not be fully realized in Washington, D.C.,” Brian Campbell ’21, a member of the We the People team said. “However, I understand that our health and safety comes first, and that if we must take precautionary measures to guard against sickness, so be it. It is unfortunate that it happened to be my year, but there is only so much you can do.”