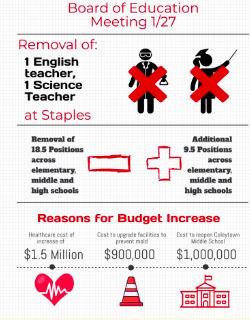 The Board of Education (BOE) announced on Jan. 27 that they were considering cutting two teacher positions, one position each  English and science departments at Staples High School.

Costs accrued for treating the mold at Coleytown Middle School, upgrading facilities in other Westport schools and addressing the staff healthcare cost surge have contributed to heavy hits on the budget. Estimates for these costs alone are over $2 million dollars.

Due to all of these expenses, the BOE has reviewed the potential staff member cuts that would ultimately help reach their budget target.

“I had met with the principals and we talked about where we might find the savings and unfortunately we had to reduce positions at each level of the district. Elementary, middle school and high school,” Dr. David Abbey, interim superintendent of schools, said.

Although nothing has been finalized, there have been many questions regarding the possible effects on the English and science departments.

Dr. A.J. Scheetz, science coordinator for grades 6-12, believes that removing a teaching position from the science department may have negative impacts on the science classes. “It will drive class sizes up,” Scheetz said. “It will have an impact on some of the electives we run.[…] For a long term strategy, I would look at our electives and maybe some would only run every other year.”

To decide which departments would have positions cut, Abbey met with the head of the department for each curriculum and went through the number of teachers versus the amount of students enrolled in each class to try and see which department would lose the least by removing a teacher. These changes have not only been considered at the high school level but also at the middle and elementary school levels.

Students have also expressed concerns, fearing how the cuts would affect them and the quality of their learning..

“Everyone is valuable and no one should be cut just for expenses,” Bea Hobbs ’23 said. “Classes would be more crowded and kids would have a harder time learning stuff.”

While public concerns will be heard by the BOE, meeting the budget demands  may leave no option but to cut jobs.