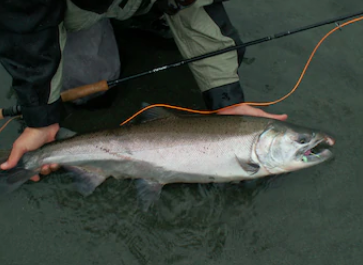 An excess of salmon fishing may contribute a decrease in the salmon population.

The salmon population has been steadily decreasing in the New England region in recent years. While there is no specific direct cause to this trend, it can be predicted that human activity, climate change and overfishing are fueling the problem. This led to a major impact on nearby ecosystems and food chains.

Despite its importance, this issue has not been brought to the attention of the Staples community, as many students are unaware of the direct effects of climate change on the state’s marine life.

“I’m shocked,” Emmy Marcus ’22 said. “I don’t know how fishing can cause that much of a decline, so that surprises me.”

While Connecticut has made steps towards developing more sustainable solutions in light of the recent plastic bag fee implemented in stores and retailers, the government’s efforts to increase the salmon population have been unsuccessful. According to the Connecticut Angler’s Guide, several New England states and the federal government have ceased salmon restoration programs.

The state has since transitioned to a “legacy program” through the Department of Energy and Environmental Protection (DEEP), in which salmon are bred in local hatcheries to preserve its biodiversity. Thus, they can do so without harming the ecosystem and the food chain.

A list of regulations was created to prevent the salmon population decline. As of right now, from Sept. 1 to Dec. 15, fishermen with licenses are only allowed to catch and release salmon. The government also limited local fishermen to certain rivers and monitored others. However, the population is still at risk and diminishing by the day.

Many students believe that a solution must be found for this growing issue. “I think there could definitely be protection over the rivers that salmon breed in and a limit on the amount of salmon that can be fished and used for food,” Jasper Cahn ’22 said.

Salmon have also affected the health and lifestyle of many humans as well. “Personally I enjoy eating salmon,” Jasper Cahn ’22 said, “so the decrease in population is harmful for the diets of many people.”