The Staples Women in Society class held a panel and showed a documentary titled “The Hunting Ground” at Toquet Hall, on March 6 from 6:00-8:00 pm in order to raise awareness about sexual assault and violence. 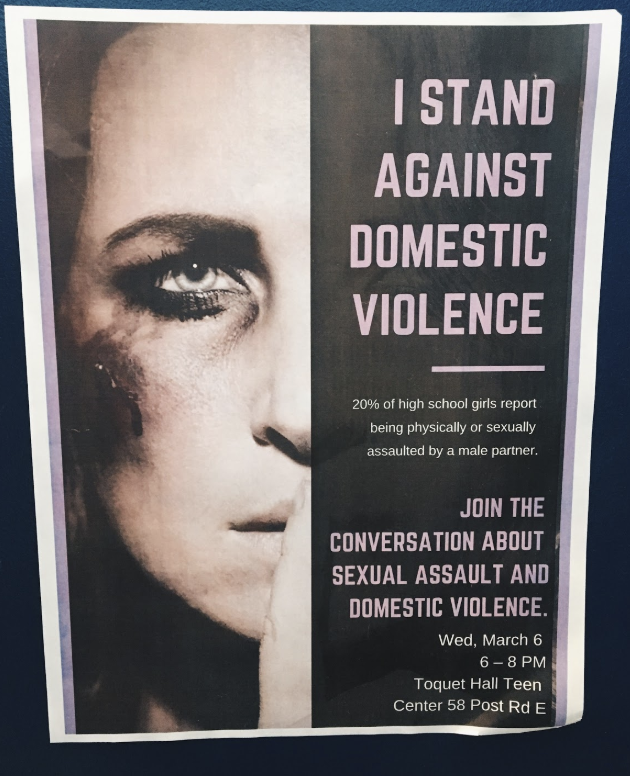 The Women in Society class posted posters throughout the school to promote the event.

The Staples Women in Society class held a panel and showed a documentary titled “The Hunting Ground” at Toquet Hall, on March 6 from 6:00-8:00 pm in order to raise awareness about sexual assault and violence.

Many Staples students attended the event to learn more about sexual assault and ask the panelists questions, as well as watch the movie being displayed.

“The night was really nicely planned and it had a really great turnout,” Ali Feder ’20 said. “The event was hosted by the women in society class as they went around and asked for donations (for the club) in the community for a raffle to be at the event.”

The documentary shown at Toquet Hall, “The Hunting Ground” focused on sexual assault cases at colleges and how Greek culture can play a role. As well as the documentary, there was a panel full of experts on this topic.

The panel answered many questions.  Olivia Sarno ’20 attended the event and was happily surprised with the questions people asked.

In addition to having the event, Staples has been trying to bring in more guests to talk about sexual violence and answer questions for students. Recently, Marie Corriveau, a woman from the Rowan Center visited Junior Health classes and spoke about sexual assault and rape in colleges.

“The woman that came in talked about how to get help when sexually assaulted,” Anna Coleman ’20 said. “She talked about rape and sexual assault statistics, specifically about those on college campuses and why it is so hard for a lot of college students to come forwards about being raped/sexually assaulted.”

“I was pleased to see the Toquet Hall posters on the bathroom stalls,” Eden Miller ’21 said. “The issue of sexual assault is an important topic to be discussed with high schoolers so we are aware of the relevancy of the issue.”