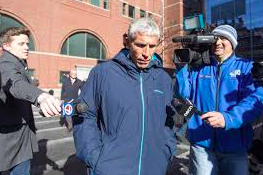 Over four dozen people, including actresses Lori Loughlin and Felicity Huffman, have been charged in a nationwide college admission cheating scandal based off of evidence released by the FBI and US Attorney’s office.

According to court records released on March 12, wealthy parents paid alleged scam artist William Singer up to $6.5 million in order to ensure their children’s’ admission into elite colleges such as Georgetown, University of California, Stanford, University of Texas, UCLA, Yale and Wake Forest.

As this year’s college acceptance decisions are nearing completion, many students, both admitted and those still awaiting responses, are anxious to see what this means for their applications.

“I sympathize for the students who were unaware of their parents’ actions,” Taylor Barr ’19 said. “They weren’t involved, and yet the credibility of their education will forever be under question.”

The U.S. Attorney’s District of Massachusetts Office recorded that the conspiracy involved bribing SAT and ACT exam administrators, bribing university athletic coaches and administrators, and using celebrities’ charities or organizations to conceal generous donations made to the universities before their child’s acceptance into the colleges.

“Essential defendant in scheme, William Singer, will plead guilty today for the charges of racketeering conspiracy, money laundering conspiracy, conspiracy to defraud the United States of America, and obstruction of justice,” Andrew Lelling, US Attorney, said in a press conference held on March 12. “Singer allegedly ran a college counseling service, and something called the Key Worldwide Foundation. Between roughly 2011 to 2018, wealthy parents paid Singer $25 million in total to guarantee that their children’s admissions into universities.”