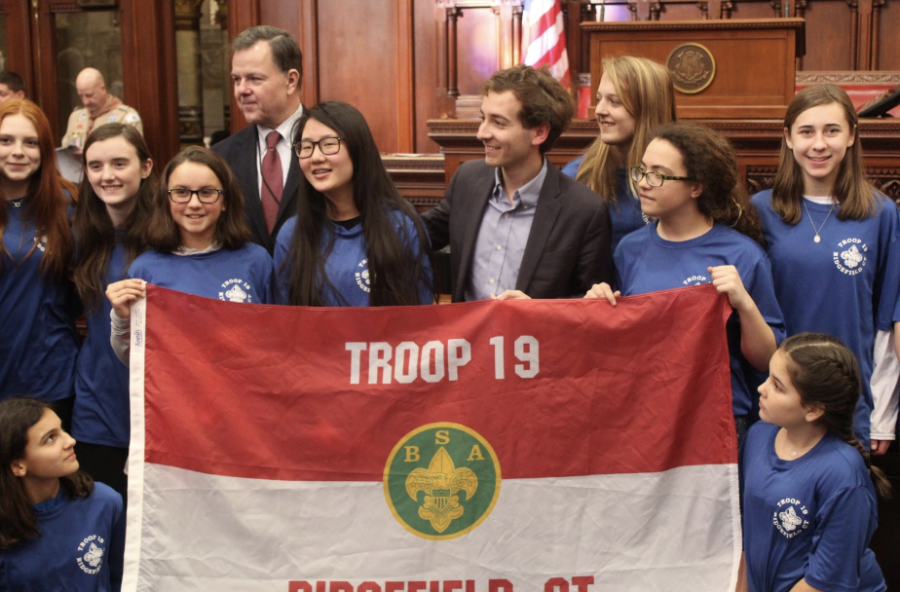 State senator, Will Haskell, poses with part of Troop 19, that consists of girls officially joining Scouts of America. The new rule that went into effect Feb. 1, now allows girls between 11 and 17 to join what was formerly known as Boy Scouts of America.

As of Feb. 1, girls can join the troops of formerly named-Boy Scouts of America following a gender inclusive decision made by the organization in October 2017.

Previously, Girl Scouts were widely recognized to do activities such as sell cookies and other crafts whereas boys might typically do camping trips and knot tying. However, girls interested in things generally done by boys are now able to join the renamed “Scouts of America.” A statement issued by Scouts of America says there was a large demand in the years leading up to the change.

Staples high schooler and longtime Boy Scout member, Justin Schmidt ’19 feels that something was odd about the decision. “I believe that letting girls join Boy Scouts is a very sudden shift in culture within the Scouting community,” Schmidt said. “I would have rather seen a shift in the Girl Scout curriculum– seeing that this is the biggest part of the debate–than just integrating two entirely different cultures.”

New York president of The National Organization for Women, Sonia Ossorio, has been demanding this change for years now.

“The U.S. [was] one of the only countries in the world that [didn’t] offer the opportunity for co-ed scouting for our youth,” Ossorio said. “By enabling young girls and boys to learn formative skills side-by-side, Scouting can best offer empowerment for all young people to develop into confident leaders.”

However, many didn’t see the change as beneficial to anyone involved, and the new rule brought forward a wave of angry response from girls, boys and parents affiliated with various scout programs.

Some, including Donald Trump Jr., were confused as to why the programs have to be merged, when separate ones exist. After hearing of the new policy of accepting females, Trump tweeted on October 11 2017, “Strange, I thought that’s what the Girl Scouts was for???”

Also confused is Macey Lavoie ’20, who has been a Girl Scout since first grade.

“I don’t understand why girls want to join Boy Scouts instead of Girl Scouts when Girl Scouts is so much better,” Lavoie said. “It’s where I met the friends I’m still friends with now who are all still in it. I love helping out in the community and running events such as thinking day every March.”

Although only going into effect this past Feb 1, the decision was made over a year ago, giving the Girl Scouts of America (GSUSA) time to begin pursuing legal action against Scouts of America for trademark infringement and the creation of confusion among the public concerning the status of their brand.

A letter written by GSUSA President, Kathy Hopinkah Hannan, to BSA President, Randall Stephenson, on Aug. 21, 2017 said that the GSUSA felt “unsettled that BSA would seek to upend a paradigm that has served both boys and girls so well through the years by moving forward with a plan that would result in fundamentally undercutting Girl Scouts of the USA.”

“Girl Scouts believes in meeting the needs of America’s youth through single gender programming by creating a safe place for girls to learn and thrive,” Hannan wrote.

National Organization for Women president, Toni Van Pelt hinks in this two sided situation. “The devil is in the details and we need to wait and see how this plays out,” Van Pelt said.