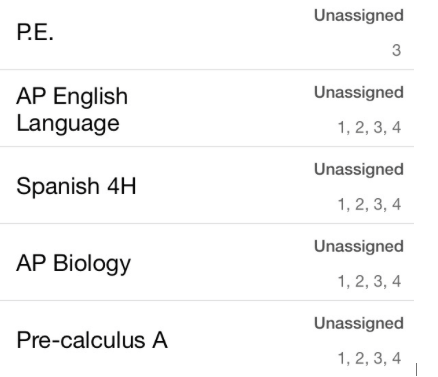 The Staples administration and guidance department have implemented changes to the course selection and scheduling process, requiring that students wait until August of the upcoming school year to view the names of their teachers and the periods they have for each class. In June, students will only receive a list of their scheduled courses, without specific teachers or periods.

On Jan. 21, all students received an email on behalf of the administration and guidance department explaining the need for these scheduling changes.

“We are making this change to ensure that we have the flexibility to create an optimal master schedule that maximizes our resources and best serves the needs of our 1,850 students,” the email wrote. “In recent years, the number of changes requested has increased as a result of summer work, students coming to us from middle and high schools outside of the Westport Public Schools and various other factors.”

D’Amico hopes that the schedules will be released early on so conflicts can be addressed before the beginning of the school year. According to D’Amico, guidance counselors will be available throughout the summer to make any changes in the case of a scheduling conflict.

Despite this, many students are concerned about waiting to find out their teachers until the summer. Sydney Lovro ’20 believes such an issue reflects the disparity in class difficulty from teacher to teacher.

“While I understand the administration’s decision to withhold the names of the teachers,” Lovro said, “I also believe the root of the problem lies in our teachers.”

Lovro explained that maintaining consistent expectations is a prevalent problem within the Staples community. “There shouldn’t be such a huge difference between the way a class is taught due to the teacher who teaches it,” she said.

D’Amico understands concerns regarding the influence teachers have on the difficulty of a course.

“Ultimately, the curriculum and expectation of performance should be the same, regardless of teacher,” D’Amico said. “I know that our department coordinators do a lot of work to ensure there is a lack of disparity, but I definitely think that it’s an important conversation for us to have in the future.”

Despite student frustrations with the change of scheduling plans, according to D’Amico, most schools do not release their schedules until the beginning of the school year.

“When we talked to our PowerSchool representative, who works with thousands of schools throughout the country,” D’Amico said, “we learned that us and one school they work with in Arizona are the only ones that do final schedules before the end of the school year.”