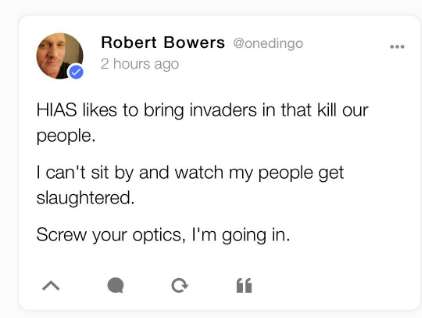 Eleven are dead and six are wounded following a mass shooting at the Tree of Life synagogue in Pittsburgh, Pennsylvania on the morning of Saturday, Oct. 27. Robert D. Bowers, 46, yielded himself to police custody after opening fire on the synagogue, then barricaded himself in a third story office.

Pittsburgh police reported Bowers yelled “all Jews must die” before firing with an AR-15 assault rifle and three handguns, according to Pittsburgh CBS News.

The town of Westport announced on its Facebook page that it has increased law enforcement presence at local communities of worship as a precautionary measure.

“Today’s attack, unfortunately, reminds us that we must always be vigilant, but at the same time, commit ourselves to always care for one another, respect our differences and to treat each other with civility. And, in an abundance of caution, our Police Department has increased its presence at our religious institutions.’ – First Selectman Jim Marpe,” according to @westportct.gov on Facebook.

Luca Valadares ’19 believes this assault is undemonstrative of the message of peace that the United States is trying to uphold. “The gun control epidemic has been pretty controversial,” Valadares said. “I feel like this event definitely makes it seem like it should be harder to acquire a weapon.”

On the day following the attack, Oct. 28, 2018, more than 1,000 people gathered at local  Squirrel Hill, Pittsburgh, Pennsylvania for a high-school-student-organized candlelight vigil to show support for the victims’ families, according to Pam Surano of Pittsburgh CBS news.

Four police officers were among the wounded according to Fox News. The attack came in the middle of a baby naming ceremony, however no children were hurt.

President Donald Trump condemned the attack, advocating for the death penalty and calling Bowers a “wacko.” Trump went on to say the shooting had little to do with gun laws, instead placing blame on the lack of proper security. “If they had protection inside, the results would have been far better,” Trump said.

Bowers had used social media, specifically Twitter, to voice his disdain for President Trump and Jews up to hours before the attack.

Bowers had also been vocal on Twitter speaking out against HIAS (The Hebrew Immigrant Aid Society), stating his contempt for the Jewish “invaders” brought in by the humanitarian aid organization.

Following the attack, HIAS issued a statement expressing their devastation, empathizing with the Tree of Life Synagogue. “As we try to process this horrifying tragedy, we pray that the American Jewish community and the country can find healing,” according to HIAS.