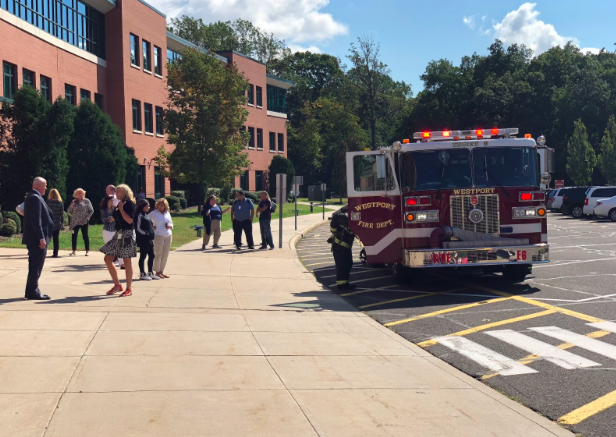 Staples High School was evacuated from 12:20 p.m. to 1:10 p.m. on Oct. 3 after an odor was reported in the junior and senior bookroom in the English hallway at noon. The Westport Fire Department reported that the odor was caused by a sewage leak.

A social studies staff member who preferred to remain anonymous reported the smell this afternoon.  “When I opened the door I immediately noticed a very intense smell of rotten eggs,” the staff member said.  After noticing pipes on the ceiling, the staff member looked for a cause of the smell, checking if there was a leak or a dead animal.

According to Deputy Chief of the Westport Fire Department Michael Kronick, firemen conducted tests to determine the presence of Carbon Monoxide, other gases and any explosive contents.  “We believe [the odor] to be from a broken sewer pipe in the building,” Kronick said. “We ended up smelling a […] sulfur-y dirty water smell and traced it to a bathroom on the second floor.”

Principal James D’Amico pulled the fire alarm after reports of the odor came in.  “To be cautious, we decided to evacuate the building and had to wait until the fire department said we were clear to re-enter after their thorough sweep of the building,” D’Amico said.  “When the fire department tested, they determined that the odor was dissipating. So it should be gone by the end of the day.”