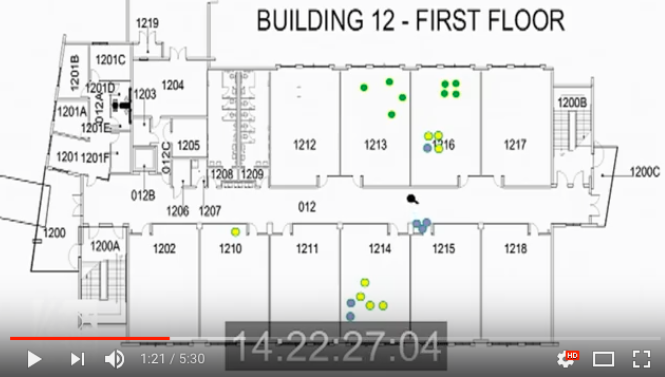 The animation provides the first official account of gunman Nikolas Cruz’s movement through Marjory Stoneman Douglas High School. It was created with the intention of noticing Stoneman Douglas’s design errors that allowed Cruz to move so quickly throughout the school.

Paula McMahon, a reporter from the Sun Sentinel, reported in an article that many, including Andrew Pollack, father of victim Meadow Pollack, found the animation disturbing, despite its replacement of people with dots. “I knew which dot was my daughter so it was pretty brutal for me,” Andrew Pollack said.

In the animation, students are represented by green dots, whereas staff appears blue. After someone is injured, their dot becomes yellow. The dots of those who have been killed turn purple.

In just six minutes, Cruz managed to visit all three floors of Stoneman Douglas. Despite police arriving just two minutes after the rampage began, none attempted to enter the building.

“I watched the video with my parents and I wanted to cry,” Ella Meyer ’19 said. “It was horrible to see those dots move and change colors. I couldn’t sit through the entire thing. I made my mom turn it off.”

The video was played for members of a Florida commission investigating the mass shooting. They noticed how Cruz never actually entered a classroom. Instead, he shot through doors or small windows on those doors. A panel will discuss the designs of such classrooms and how security faults led to the death of seventeen people.

“It may be a chilling video, but even more disturbing is that it reduces people to just colored dots,” Sam Laskin ’20 said. “The victims were real people with genuine lives and families. They already are portrayed across the country as pictures that flash on news screens. Representing these victims as moving dots on a map has the potential to transform this senseless act of violence into what would otherwise look like a video game.”