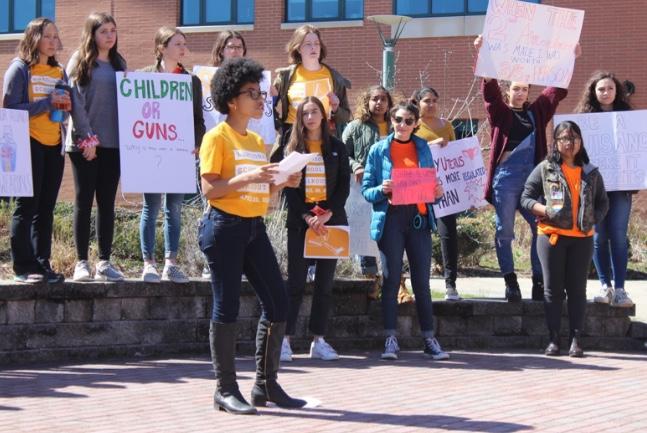 Students walked out of class on Friday, April 20 as part of a national school walkout to protest in favor of increased gun legislation in the US. Despite warnings of unexcused absences from the administration, the walkout took place in the Staples courtyard and was followed by a rally on Veteran’s Green in Westport.

“I feel that the walkout was a huge success,” organizer Peri Kessler ’18 said. “So many kids called their representatives, voiced their concerns and opinions, and overall engaged in activism in a meaningful way.”

Ben Gross ’20 participated in the walkout and feels passionately about the subject of gun control. “Too many people die from gun deaths every year,” Gross said. “I’m not just talking about school shootings in particular, but the figures that show overall gun deaths are horrifying and as an American I not only have the right, but the responsibility to let my voice be heard.”

However, not all students walked out. Luke Welch ’19 decided against walking out. “While I do believe it is important to fight for what you believe in, I don’t think fighting for gun rights in a school setting is the place to do it,” Welch said. “If anything, it should be at the state capitol or in D.C., but within the school walls […] it’s not the right place to do it. I think it will just promote tension and aggression.”

Student activists rallied in the courtyard, chanted and listened to student speakers.

Elana Atlas ’21 spoke at the walkout. “We are hiding under our desks, we are hearing shots get closer, we are texting our parents, our siblings, our best friends goodbye, we are bleeding out on classroom floors, and politicians are doing nothing,” Atlas said in her speech.

Kessler was pleased with the turnout of the walkout and is optimistic for the future of the movement. “My goal was to have Staples students make tangible change on the issue of gun control, and I believe with the number of students who contacted their representatives we achieved that,” Kessler said. “The real measure of success for the walkout will be if we can sustain this level of activism and passion.”