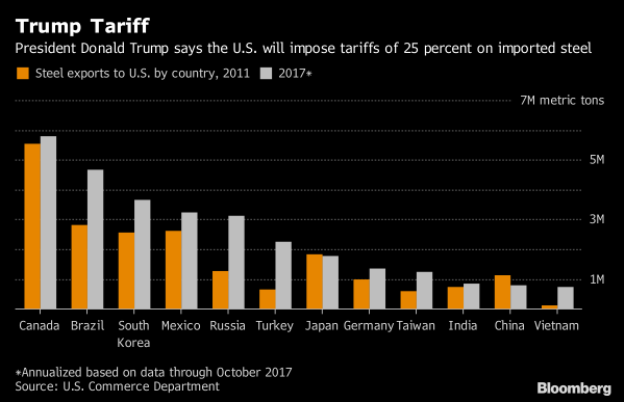 President Trump announced new tariffs on imported steel and aluminum on March 1, 2018, in an attempt to aid the declining American markets. Taxing 25 percent on steel and 10 percent on aluminum, the tariffs aim to increase domestic steel and aluminum production and “level the playing field” for American trade in order to compete with China and other competitors according to Trump.

“You’re going to see a lot of good things happen,” Donald Trump said. “What has been allowed to go on for decades is disgraceful.”

The new tariffs were made under national security trade provisions, allowing the government some leeway in who they direct the restrictions on. “It will be possible to exempt imports from military allies in NATO, as well as Japan and South Korea, focusing the tariffs on China and avoiding the risk of a broader trade war,” according to Project Syndicate.

Increased tariffs on steel and aluminum could mean a markup in prices for goods requiring these metals, for instance, soda cans, according to CNBC. This leads to the possibility of price increases on products like Switch beverages and Polar Seltzer, found commonly in the Staples cafeteria.