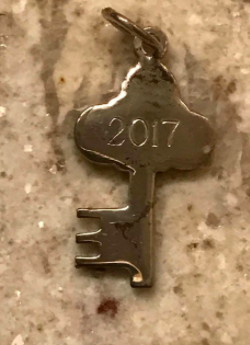 On Thursday, June 8 at 7:30 p.m., the annual Staples Awards Ceremony was held in the auditorium honoring students for a variety of academic, extracurricular and community service achievements. Among the most prestigious of the awards presented was the Staples Key Award commending this year’s nominees: Isabelle Amlicke ’17, Charlotte Rossi ’17 and Jay Mudholkar ’17; Mudholkar was ultimately elected as the recipient of the award.

“Three nominees are selected by the faculty in recognition of superior academic achievement, loyalty to Staples and achievements and contributions to the Staples community,” describes the Staples guidance website which instructed the graduating class to complete the final survey vote determining the recipient. This system allows a balance of student and faculty voice in selecting the winner.

“It felt unreal. For the school to consider me and for our grade to acknowledge me was such a special feeling,” Mudholkar said following the ceremony.

Rossi expressed similar gratitude upon being called to the office for her nomination. “When Mr. D’Amico called me, Jay, and Isabelle into his office, I was honestly surprised and had no idea it was even a possibility,” Rossi said. “I really owe it to Mrs. Schwartz. I wouldn’t have ever been in this spot if it wasn’t for her,” she later added, thanking director of guidance Elaine Schwartz who will be retiring this year.

Each of the candidates embodied the well-rounded Staples’ attitude recognized by the Key award. For Amlicke, much of her school pride and involvement came from her four years as a violinist for the school orchestra and the many honors courses she challenged herself with academically.

“Being a part of difficult honors classes where everyone commiserates and becomes close through helping each other out gave me a sense of being part of a community besides teaching me a lot academically,” Amlicke said.

Mudholkar also fostered a deep connection with the school community through his extracurriculars as a piccoloist and flautist for the band and as a four-year varsity player and senior captain on the tennis team. “My interest in this array of activities was bolstered by the amazing people I was able to meet, and I think that positive culture paired with my genuine interest in the areas helped contribute to me becoming a well-rounded person,” he said.

For Rossi as well as the other nominees, her commitment to a well-rounded lifestyle does not stop with Staples. She believes playing for the Fordham women’s soccer team next year will force her to strike a balance between sports and academics while seeking out the peers and adults needed for any guidance.

“I want to continue to do community service, make as many connections as I can in college and beyond and concentrate on learning as much as I can from classes and general life,” Amlicke echoed with a similar sentiment.

As far as advice for other students, Mudholkar and the other nominees advise independently seeking, and sticking to any interests and passions.

“Really just to do what you enjoy, and enjoy the people you meet,” Mudholkar said.  I really loved everything I was involved in in high school, and I can’t thank the Staples’ community enough.”