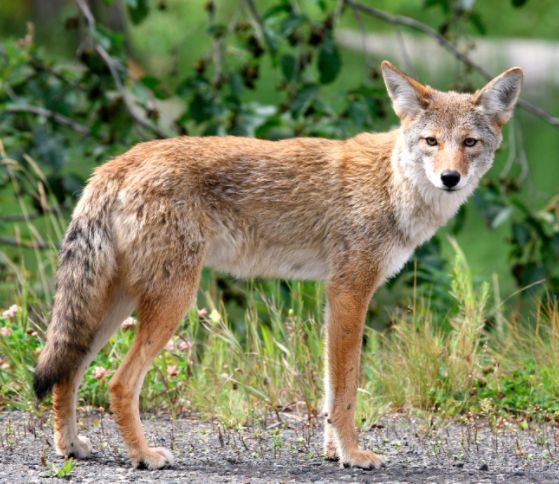 In the recent months, Westport has “experienced several incidents involving coyotes” and the Westport Police Department (WPD) has provided guidelines for handling the animals.

“The coyote’s ability to survive and take advantage of food sources found in and around man made habitats has resulted in an increase in coyote related conflicts,” the WPD and Town of Westport wrote in a statement.

A few months ago, Westport resident Peter Mackey’s dog was killed by a coyote in his backyard. This particular incident has brought attention to the coyote problem in Westport after Mackey wrote a report about the incident in Dan Woog’s 06880.

“It was a quiet Saturday evening. As usual, I let our dogs out at dusk, to do their final duties. But I’ll never forget that night,” Mackey wrote. “Murphy had 27 puncture wounds, his muscles ripped from his spinal cord and internal damage he would never recover from.”

“In the process of dealing with this, I’ve discovered that Westport is the only town in Connecticut that has an ordinance against trapping or killing wild animals on private property,” Mackey wrote.

Rebecca Lee ’17, a pet owner, believes Westport “doesn’t need to do anything” regarding coyotes, but rather its residents who should take action.

“If we’re just a little more careful at night with pets, I think it’d be fine because you have to remember that this is their [coyote’s] habitat and living area too,” Lee said. “We shouldn’t just kill coyotes because they’re doing what they need to survive, which is, unfortunately, sometimes killing pets in Westport.”

A couple months ago, Lee and her dog had a “brief encounter” with a coyote when she let her dog outside.

“A coyote was standing on the edge of my property by my lamppost,” Lee said. “My dog and I immediately went back inside and I waited a few hours before taking her out again. The coyote was gone when I took her out again afterwards.”

In response to Lee’s encounter with a coyote, she is taking more precautions when her dog goes outside.

“Someone from my family takes the dogs out at night but we still let the dogs out alone during the day since we can easily see them. Other than that, we haven’t done much else to prevent coyote attacks and we’ve been fine,” Lee said.

The W.P.D. and the Town of Westport has suggested residents obey the guidelines found using this link.

In addition, the Humane Society of the United States published a Coyote Management and Coexistence Plan in order to ensure residents understand what to do if ever in a situation involving a coyote.

The Humane Society explains the reasoning behind a coyote’s choice of prey.

“Pets are a normal part of an urban landscape. Within their territory, coyotes may consider pets as potential prey or potential competitors,” the Humane Society of the United States wrote.

Despite the suggestions, pet owner Amanda Neckritz ’18 remains concerned about coyotes in Westport.

“I am worried a coyote may attack my puppy because she’s so small,” Neckritz said.

Lee believes there is “always an underlying fear that your pet will get attacked” by a coyote and also suggests a few tips.

“If you’re scared then don’t let them [your pets] out alone,” Lee said. “I know that we’ll always know what’s happening with them when they’re outside.”