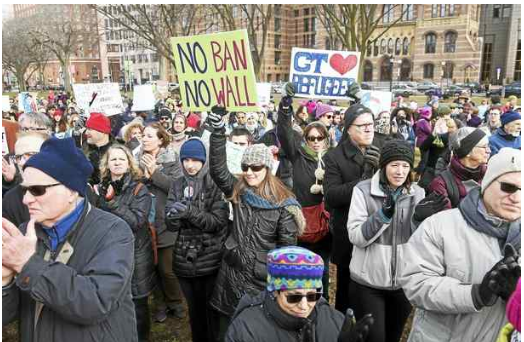 Over 2,500 people went to the IRIS Run for Refugees 5k on Feb. 4 in New Haven, the highest number of registrations in the history of the Run for Refugees event. This walk raises money for IRIS, which resettles refugees to local homes. Students and teachers took part in this run to raise awareness for refugees.

“It’s really important for people to realize that so many people in the world don’t have the access or abilities we do,” Hayley Foote ’17 a student who works with Change for Syria said.

“They really need support to try to reach better lives for themselves and their families.”

In light of Trump’s recent executive order banning immigrants from seven Muslim majority nations, many people came to the run in order to demonstrate against the order which has been questioned for its constitutionality.

“I strongly disagree with it and am glad that it was blocked in the courts.” Marta Clanton ’17, a senior who participated in the run said. “It’s a great example to show how checks and balances are still in place to block against unreasonable executive orders.”

While many students found the executive order unconstitutional, some students had contradicting opinions regarding the subject.

“While I do understand why many students find the executive order unconstitutional, we need better national security in our country because radical Islamic terrorism is too serious to not be acted upon,” Katie Loucas ’18, a Trump supporter, said. “Refugees are clearly in difficult living conditions but we need to hold off on them until we can make sure our country is secure.”

“This overwhelming amount of people who took part in the event show the support people have for Refugee families in the United States.” Nico Rossi ’18 said.

IRIS has helped provide settlements for 530 refugee families around Connecticut and have organized numerous events to raise to resettle the one million refugees that are currently living in Syria requesting refuge in the United States and Europe.

“Runs like these raise so much money to help people transition nicely after the struggles they’ve faced.” Foote said, “We need to realize that refugee families want to receive the same opportunities that we have living in America.”