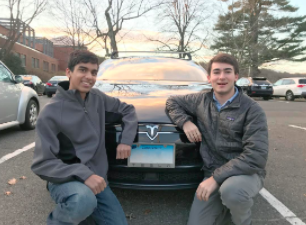 Dylan Diamond ’17 and Neil Soni ’18’s app, Tesla Toolbox, was released into the App Store in late Sept. in hopes of making the cars’ controls easier to access and the overall Tesla experience more enjoyable.

“I first got the idea for the app when I got an Apple Watch and realized that Tesla had not developed a product for this platform,” Diamond said. After that, the process required “hours in the passenger seat learning everything I could about the onboard computers and how to connect to them.”

The fully functional iOS App with an intuitive watch interface sells for $5.99. Among many of the features are driving the car remotely, controlling climate, battery settings, basic controls such as locking and lights, monitoring trips, and seeing a live view of the car’s location.

With Tesla Toolbox being his seventh app created, Diamond demonstrates the increase in popularity of app-making among the current teenage population.

This trend is attributed by some to easier access to computer science classes and technology. “You can sit down with your laptop on websites like Stack Overflow for 10 minutes while you’re on the go and do some programming and then head off to lunch. So accessibility has made all of this easier,” AP Computer Science teacher David Scrofani said.

The Westport community and greater populations have reacted positively to it’s younger innovators. “The idea of having everything to control my family’s Tesla in one app is awesome,” Maddie Steele ’19 said. “I love the car itself, and this app will enhance the using of it.”

Soni and Diamond are considering all possibilities for the future of the app. “As Tesla already has a base app, we don’t really know if Tesla would be interested in buying us out,” Soni said. One thing for certain is that they will enter into the field of computer science in college.

The app has been updated 3 times and currently has over 2,000 users. Diamond and Soni hope the app will continue to provide “ease to Tesla owners with their vehicles.”

As for the field of computer science, young innovators like Diamond and Soni are certainly making their mark. “Taking a look at emerging technologies in computer science right now, I’ll suggest that the students of today will push these forward,” Scrofani said.