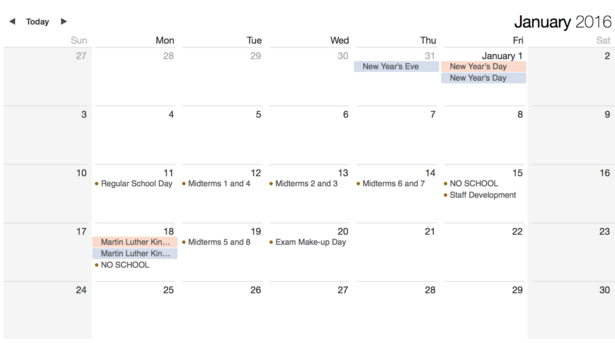 Although in the past two years midterm exams have been followed by a five-day break from school, this year’s exams do not follow this same pattern.

The week begins with a regular school day on Monday, Jan. 11. Three days of exams follow from Jan. 12-14. Then, a staff development day takes place on Friday, Jan. 15, meaning students will have the day off. The following week starts with Martin Luther King Jr. Day on Jan. 18 and exams continue on Tuesday Jan. 19, with the make-up day on Jan. 20.

Since the schedule has consisted of four consecutive exam days followed by five consecutive days off in the past, students have come to expect this. Assistant principal Patrick Micinillio corrected this misconception. “It’s just the way the numbers work out,” Micinillio said. In fact, the 2012-13 school year mirrored this year’s schedule, and the 2010-11 school year held four days of exams directly following the four-day weekend.

Many students have reacted negatively to the separation of testing. “I think it’s really important for us to have a break [after all midterms are completed], since we’re all so stressed during the year,” Nicole Kiker ’17 said. “[The current schedule] will definitely make me more stressed after the exams.”

President of the Student Assembly Jojo Adler ’16 presented the unfavorable situation to the Collaborative Team in the hopes of pushing back exams to secure the five day weekend, yet these efforts were to no avail.

“It’s clear that the students would like to have a long weekend uninterrupted by the last day of midterms,” Adler said. “It’s highly unlikely that [the exam schedule] gets pulled up,” she later added with a frowning face emoticon.

Like Adler, students have proposed replacing the Monday, Jan. 11 regular school day with the first day of exams, allowing for four consecutive exam days and the five-day weekend. However, Micinillio explains that the Monday must remain an instructional day for “symmetry purposes” in equalizing the number of instructional days per quarter.

More than easing stress, some think that a break after midterms would boost exam performance and be “a great motivational factor to study hard,” Ethan Lindenbaum ’17 said.

Especially for juniors, any break is a prime opportunity to tour colleges without missing class. Although the current schedule still allows for college visits,  “it’s much more stressful [to tour] if I have exams coming up because I’ll be worried about studying the whole time, and I won’t be able to focus on whatever school I’m seeing,” Kiker said.

The administration does not seem to share the same concerns as the students. “I don’t think it will have an effect at all,” Micinillio said.

If he were a student himself, assistant principal James Farnen would even prefer the four day weekend to prepare for the last two exams.

Yet some students do not view the four days as an effective study period. “I don’t see myself studying much during a break between [midterms] to be honest,” Ethan Shenhar ’16 said.

Victoria Capozzi, a guidance counselor and co-leader of the Resilience Project, which aims to reduce stress levels, believes the trick will be to frontload studying and manage time wisely, fully aware that this poses difficulty for many students.

“They may not be able to fully relax and do nothing,” Capozzi said.  “[But] I think that students can make a choice to relax.”

Despite complaints, the  current midterm schedule seems cemented, unless the weather interferes, but the administration will cross that bridge when they come to it.