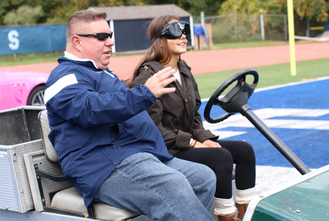 Westport Police Officer Ned Batlin prepares Claire Lonergan '17 for her drive through a course in a golf cart while wearing goggles that simulate the vision of a person after 2 to 6 beers. Photo by Jane Levy.

Staples’ Teen Awareness Group (TAG), the Westport Youth Commission and the Westport Police Department teamed up on Oct. 16 to host the Distracted Driving event, which is in its second year.

The intent of the event was to provide a safe setting to positively impact student decisions by displaying that teenagers’ impressions about the dangers of distracted driving — including but not limited to drunk driving — were often underestimations.

Reeve Jackson ’17 participated in the flagship activity in which she donned impairment goggles to operate a golf cart. The goggles ranged from visions at 0.02 — the legal limit for those under 21 — to over 0.2 BAC.

“Before trying the simulation, I totally thought [the driving] wouldn’t be that bad,” she said. However, Jackson had a “really difficult time staying in the lane,” and even “ran over some of the cones.”

Police officer Ned Batlin, who accompanied drivers, noted that most people had similar experiences. “Nobody should drink and drive. Good thing cones are inexpensive and hard to break,” Batlin quipped.

Other activities which also involved impairment goggles ranged from throwing and catching balls to actual field sobriety tests used by on-duty officers. They were all tasks that could be easily accomplished by a sober person or someone not wearing the goggles.

Despite the dismal performance of most “distracted” students, some good came out of the event, as students became more aware of the gravity of distracted driving.

“It [the activities] definitely will have an effect on my future decisions. Being that out [of focus] was not fun…it’s not smart,” Jamie Spector ’18 said.

Jack Beck ’18, who rode “The Convincer,” a crash simulator that addressed seatbelt usage rather than drinking, seconded Spector’s conclusion. “After participating in the event, I will make sure I and the people I’m with wear their seatbelts.”