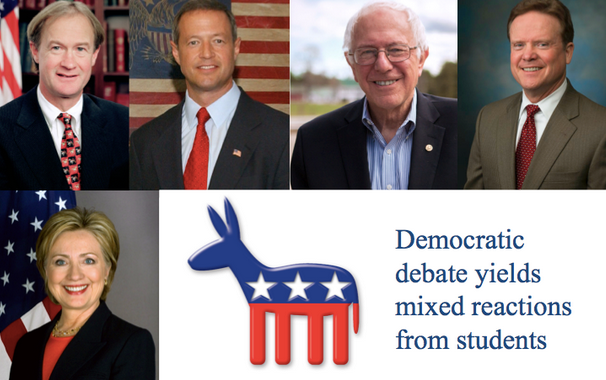 After a duo of Republican debates in Aug. and Sept., Democratic candidates got their chance under the spotlight in Las Vegas in their first debate on Tuesday, Oct. 13.

As a record 15.3 million tuned in to CNN at home, divisive issues such as abortion, climate change, foreign affairs and gun control were debated.

Many Staples students, including Max Kaplan ’17, a member of the Young Democrats club, thought both Clinton and Sanders performed well, but in the end Sanders stood out for comments expressing his hatred for the hyper-partisanship that dominates the current political landscape.

During a back and forth about Clinton’s email scandal, Sanders said, “Americans are sick of hearing about [Clinton’s] emails,” leading to one of the largest applauses of the night.

Kaplan also believes Sanders’ performance will help him gain some supporters, but that ultimately the debate won’t have a significant long term effect on the race.

“[I think Sanders] had the most memorable moments…he managed to hit on the points he needed in order to secure his base from O’Malley or Chafee potentially siphoning some of his supporters,” Kaplan said. “[However,] I doubt this debate will have any real effect on the polls in the long term, although maybe he will get a small boost.”

In contrast, other students thought Democrats, including Sanders, did not make compelling enough points.

“[Sanders] failed to make strong arguments about foreign policy and gun control,” James Allott ’17 said. “I think his track record for being a slight bit pro-gun were easy targets for the others and he did not defend his positions well.”

Nonetheless, Max Hammer ’16, co-president of the Young Democrats club, viewed the debate as a success for Democrats.

“[I] thought it went as expected with Sanders and Clinton dominating the show,” he said.