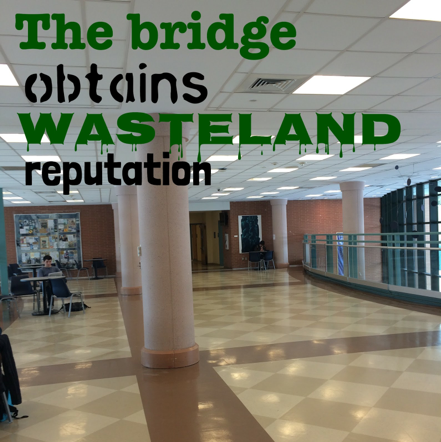 Aside from the cafeteria, Staples has an array of locations where students tend to spend their free time. With the addition of tables in some of the hallways

(first introduced during the 2013-2014 school year), increasing numbers of students have begun to lounge in the hall on the second floor dubbed “The Bridge.”

The bridge has the advantage of being located in a prime, central location of the building, complete with five tables, each with its own set of chairs.

According to principal John Dodig, “The addition of tables has taken some pressure off of the LMC during lunch.”

But, an increase in popularity to food-banned areas  comes with a price.

Elizabeth Gikas ’17 tends to spend her free periods and some lunch waves on the bridge. “Sometimes we will go to a table and find that people left water bottles and empty chip bags,” Gikas explained. “I think it is disgusting and does not create a nice or healthy work environment.”

Fatima Alanis ’18 enjoys her period five free on the bridge with her friends. “So far the trash hasn’t really been a problem to us, not as much as it is in the cafeteria,” Alanis said. “The only time it gets messy is on Mondays because we have free lunch.”

When asked, a Staples janitor was unwilling to comment on the trash situation. However,Staples has a strict no-food policy aside from the cafeteria, due to the prevalence of rodents and other animals that emerge with the availability of food and crumbs.

“Unfortunately, I don’t have enough people to cover ALL areas of the school where students should not be eating,” Dodig said. “If it can’t be resolved, we’ll get rid of the tables.”