Board of Education discusses SBAC testing and energy at meeting 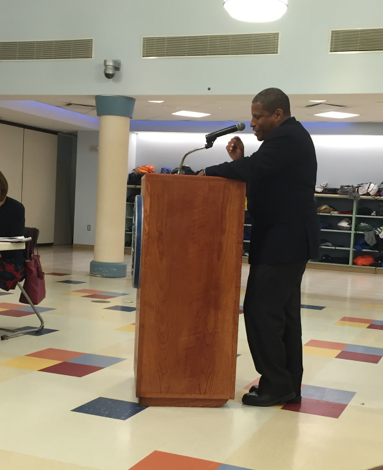 John Rice, a Partner from AKF Engineering, discusses with the board the the energy performance of a typical school and a high performance school.

On the night of March 9, the Westport Board of Education (BOE) convened in the Staples cafeteria to discuss various topics, such as clarifying some information regarding the Smarter Balance Assessments (SBAC) testing during announcements and to introduce a new energy savings plan by an engineering company and the Town of Westport.

In the beginning of the meeting during announcements, Michael Gordon, the Chair of the BOE, brought up the new SBAC testing that will begin this year. Elliott Landon, Superintendent of Westport Schools, then mentioned the standards around the new Common Core and the SBAC testing, telling the Board and the audience that the Common Core standards are long overdue and improve standards that have been lacking.

“No one can complain about the standards,” Landon told the Board and the audience.

Gordon added on, saying that the SBAC testing will help the district be better and learn where it is deficient.

“It also helps the individual student be a better test taker and be more resilient…” Gordon said to the Board and the audience.

In addition to the SBAC discussion during announcements, Dewey Loselle, Operations Director for the Town of Westport, John Rice, Partner at AKF Engineering, and Joseph Fuller. Executive Vice President at Fuller D’Angelo P.C. Architects Planners did an introductory presentation to the Board with possible new energy saving plans for the Westport schools.

During the presentation, Rice discussed a five-step process, including gathering documentation on the school buildings, and in the presentation showed a list of possible energy saving techniques, such as having LED lighting and using a geothermal energy system.

In the presentation, it was shown that Westport schools are in the “red” and below the median on an energy benchmark graph for a CBECS Percentiles Total graph measuring the percentile individual Westport schools fall under when measuring Annual Total Energy Consumption. Only Coleytown Middle School was “green,” or above the median percentile, on a graph measuring Annual Non-Electric Energy Consumption.

“We need to excel in maintenance [and saving where we can],” Loselle told the Board at the start of their presentation.

The next meeting will take place March 16 in the Staples High School cafeteria at 7:30 PM.