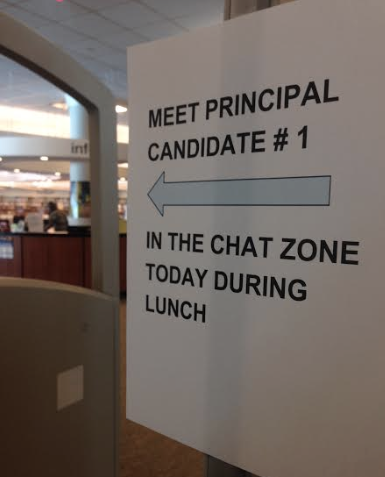 During the lunch waves on March 9, eager students gathered in the Library Learning Center’s “Chat Zone” to get to know one of the candidates for principal of Staples, Frank Costanzo.

Costanzo, a self-described fan of chocolate cream pie and the Chicago Bears, is the current principal of the Cooperative Arts and Humanities High School in New Haven, a magnet school with only 650 students.

“I’m excited about the chance for a new challenge, both in terms of scale and different environments,” Costanzo explained.

Students from all grades jostled for the chance to ask Costanzo questions, ranging from his favorite topping for pie (vanilla ice cream) to the amount of suits he owns (a few, but “a pocket square can do a lot if you don’t have a robust collection”).

According to librarian Colin Neenan, the school district decided to have Costanzo and the other finalist for new principal come speak in the library, but wanted the setting to be as informal as possible.

“They told us that we needed to have a microphone, but besides that we didn’t even move any chairs,” Neenan said.

In this casual atmosphere, Costanzo chatted about his background, his personal philosophies and his excitement about the Staples community.

Costanzo has always lived and worked in Connecticut, growing up in New Haven and going to public school in Hamden.

“I’m not a micromanager,” said Costanzo. “Leadership is steeped in my values about learning and my belief in kids.”

Kids are something that Costanzo knows a lot about. In addition to his time as principal, he has taught at New Haven academy and currently has two young children of his own.

“I have a four-year-old, Bella, and one-year-old Christian, who are amazing,” Costanzo beamed. “And my wife Nancy is a kindergarten teacher.”

After the meet and greet, students and faculty stuck around to converse with Costanzo one-on-one.

“It would be nice to have a principal who is as youthful and personable as he is,” Noah Reiner ‘15 said. “Like Dodig.”