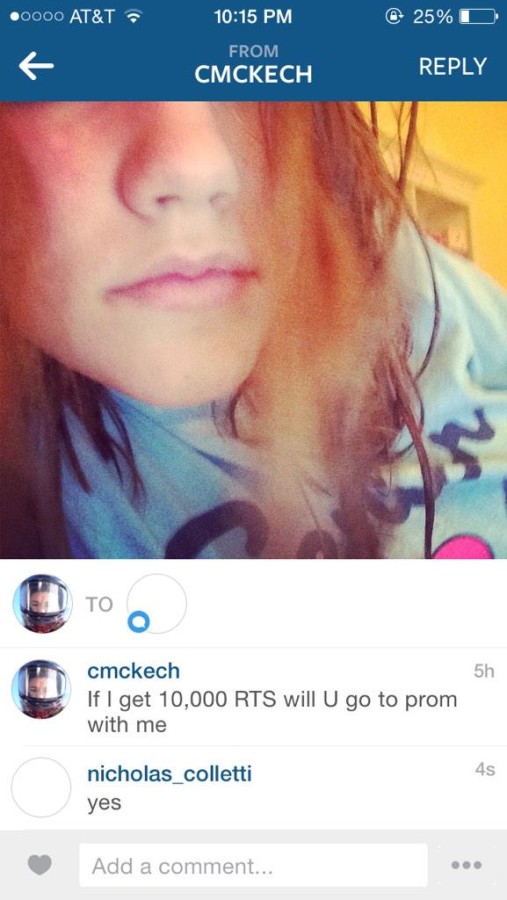 Around 5 p.m. on Monday, McKechnie sent a direct message to Colletti on Instagram, saying, “If I get 10,000 [retweets] will U go to prom with me.” To the surprise of many, he accepted.

McKechnie’s close friend Hadley Ward ’15 has been instrumental in publicizing the promposal through social media.  “I don’t think anyone expected him to respond to a direct Instagram from a girl he doesn’t follow,” Ward said.  “But, he did, and here we are.”

McKechnie tweeted a screenshot of the interaction at 7:20 p.m. with the caption, “10,000 [retweets] & @thenickcolletti TAKES ME TO PROM PLZ HELP A BROTHA OUT.”  Only a few hours later, Colletti really did “help a brotha out.”

“I didn’t think he was serious, but then when he retweeted it, it seemed like he wanted it to get attention,” McKechnie said.  The tweet is now visible to over 82,000 followers via Colletti.

“We’ve [got to] work up to the 10,000,” Ward said.  In the Staples Superfans Facebook group Ward encouraged members to “please forward our request to camp friends, prospective college roomates [sic], hip aunts and uncles ect. [sic].”  So far, efforts to spread the word have been successful.

As of 7:20 p.m., Tuesday, only 24 hours after the tweets creation, McKechnie’s post has reached over 1,000 retweets, already 10 percent of the way to Colletti’s prom appearance.

“She’s a spontaneous person,” Colin McKechnie ’17 said, referring to his sister.  “She just thought it would be funny to do, but she definitely didn’t expect it to turn into what it did.”

As McKechnie’s situation has gone semi-viral, friends and peers have shared their excitement.

One commenter with the username @csaracs urged other users to retweet the post “for the love of all that is holy.” Unfortunately, McKechnie’s newfound fame has prompted some outlandish internet hate.

“Some people were tagging me and telling me I look like an Xbox,” she laughed.  “I don’t know why.”

Fortunately, the hate has not deterred McKechnie from her mission to get the word out and reach 10,000 retweets.  “I feel like you’ve [got to] get [TV personality] Ellen [Degeneres] on it, but I feel like she doesn’t know who he is.”

Vine user Coletti, who Ward described as “hilarious boss enigma” may not be acquainted with Ellen DeGeneres, but his 480 thousand Vine followers would definitely make him the most famous attendant of the class of 2015’s senior prom.