The thrills of the Bills 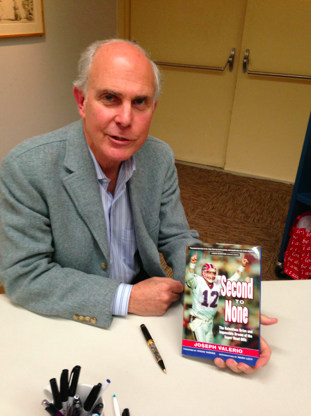 In a tribute to the relentless Buffalo Bills and their loyal fans,  ESPN reporter and Westporter Joe Valerio spoke about his book “Second to None” on Wednesday, Dec 10. at the Westport Public Library.

As an Emmy award winner for sports writing and producing, Valerio’s vivid depictions and fond memories as a reporter gave insight to a Buffalo Bill’s team who was constantly “haunted by that one game, one loss, or one moment.” Despite consecutive appearances in the Super Bowl from 1991-1994, they never managed to win.

The stand out moment, in his opinion, was the ending to the 1991 Super Bowl.  Down 20-19, star quarterback Jim Kelly marched his team 60 yards down the field to set up a potential game-winning field goal.

“You figured with the emotion of the moment, the adrenaline pumping, the kick is going to go far enough. It’s not going to be short,” Valerio said.

“It’s still the most dramatic ending of any super bowl,” Valerio said.

In addition to the losses, Valerio dove deeper into the unparalleled passion of the team, city and fans. He cited the relentlessness of the Bills whose fans matched their character, chanting “We love Scott!” even after the missed field goal.

After giving a quick blurb about the book, he read a few chapters, followed by a Q and A. The introduction was given by Dave Ruden, a major high school sports reporter who has previously worked at ESPN and The New York Times.