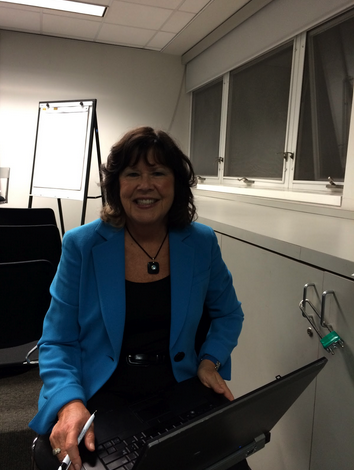 Grieving mother founds a charity and writes a book in a fight against addiction.

Ginger Katz, a former Westport resident, lost her son to a heroin overdose in 1996. Ian Eaccarino was 21 years old.

18 years later, Katz and her husband, Larry, tour the country with the charity they founded, The Courage to Speak Foundation, based in Norwalk, Conn. At 7 pm on Wed., Oct. 1, she visited the Westport library.

Their mission is to teach everyone, from parents to fourth graders, about drug and alcohol addiction, and to prevent more families from suffering the pain of addiction. Katz wishes to break “the conspiracy of silence,” the taboo surrounding addiction.

Katz’s book, “Sunny’s Story,” tells of Ian’s addiction through the narration of their pet beagle. For readers of all ages, Sunny narrates watching his owner fall into bad friendships and worse situations.

“Sunny tried to wake me up the night Ian died. He climbed four flights of stairs from Ian’s bed to mine. Ian had come to me that night, asking to go to the doctor in the morning, to get help. And that was the best night of sleep I had in five months. I was sleeping soundly because Ian wanted to get help,” Ginger Katz said.

Years later, Katz would wonder: what if their dog Sunny could speak. What would have happened?

“Sunny’s message to me was undelivered. I found Ian dead the next morning. He didn’t get a second chance. If Sunny could talk, he’d have a lot to say,” Ginger Katz said.

In her journey since 1996, Katz has been written about by the New York Times, twice, and named 2000 Woman of the Year by the Connecticut Post.

The press’s reaction was rewarding—even more rewarding were parents’ support for Katz. “They get it. They get what I’m telling them,” Ginger Katz mused.

Sometimes adolescents attending her events come up to Katz and say they are going to get help. Sometimes parents say they now know what signs of addiction to look for.

A particular instance stuck with Katz through the years.

“A young child once said to me, ‘I never understood addiction. I know there are drugs, but I didn’t understand addiction before you spoke,’” Katz said.