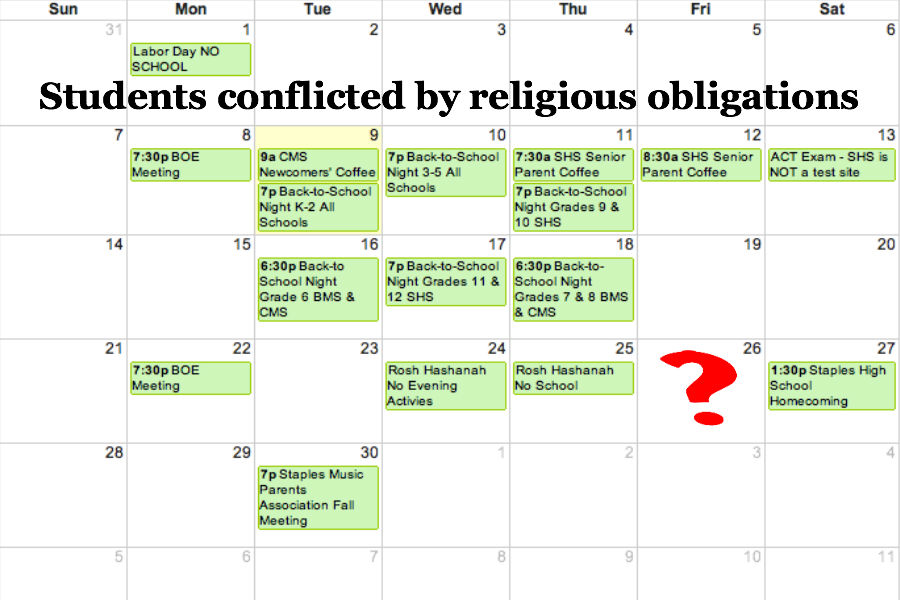 The publishing of the Westport School Calendar lead to many students’ concerns over the lack of recognition for several religious holy days.

The most notable religious holy day not being recognized is the second day of Rosh Hashanah.

“The second day of Rosh Hashanah is not a day off because the Board of Education has not received a demand by the local electorate to make it so,” Superintendent of Westport Public Schools, Dr. Elliott Landon said.

Although there are a large number of religious holidays, the Connecticut State Legislature has only deemed a few as mandatory days off. These include Christmas, Yom Kippur, Good Friday, and the first day of Rosh Hashanah.

Annie Haroun ’16 is one of many who celebrates the major Jewish holidays such as Yom Kippur and Rosh Hashanah. However, Haroun believes as many holy days in Judaism aren’t recognized at all in the school calendar, the ones we do celebrate should be celebrated to their full extent.

Haroun no longer goes to services on the second day because it’s become too difficult to catch up after missing class. In addition to the regular workload, this year the second day of Rosh Hashanah falls on a Friday, a day often devoted for tests in many classes.

Zoe Samuels ’17  expressed concern as her family always takes the second day off for services, despite the large amount of makeup work that follows.

“I shouldn’t have to choose between academics and religion. It’s unfair that some religious holidays are written in and others aren’t,” Samuels said.