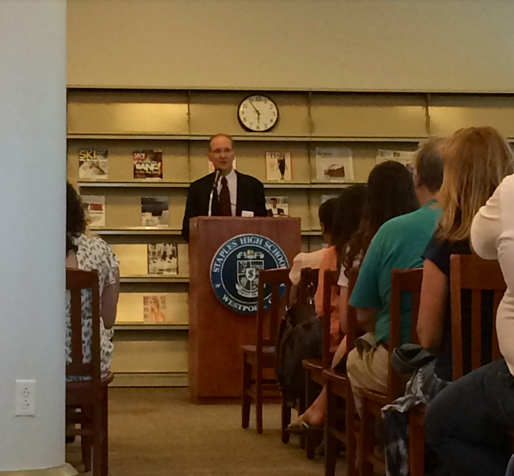 On Wednesday, June 4, the library buzzed with students, parents, and donors as Staples Tuition Grants (STG) awarded a record $320,000 in grants to 112 Staples students.

The STG program provides tuition assistance to Staples seniors and alumni to allow for the opportunity to continue education after Staples. According to STG, “While our criteria is solely financial need, the grant recipients have also distinguished themselves during their time at Staples.”

Megumi Asada ’13, who just finished her first year at Williams College, was awarded the Jean Beasley Memorial Award. “In my case because I’m considering going to medical school, being awarded a grant goes a long way in terms of reducing college loans and debt. I know that hinders a lot of people’s future goals, and it’s really important to me that people are so generous here and that they help people further their educational goals after college.”

Bruce agreed on the importance of STG. “Formal education is a foundation upon which you can build for the rest of your lives. It’s an opportunity to improve yourself and eventually to improve the lives of those around you: your family, your friends, and your community.”

STG has grown since it originated with a $100 donation from the Staples PTA in 1943. With far more donors today, it continues to change the lives of hundreds of Staples students.

“There are few greater gifts than to help a person establish his or her own way in the world,” Bruce said.