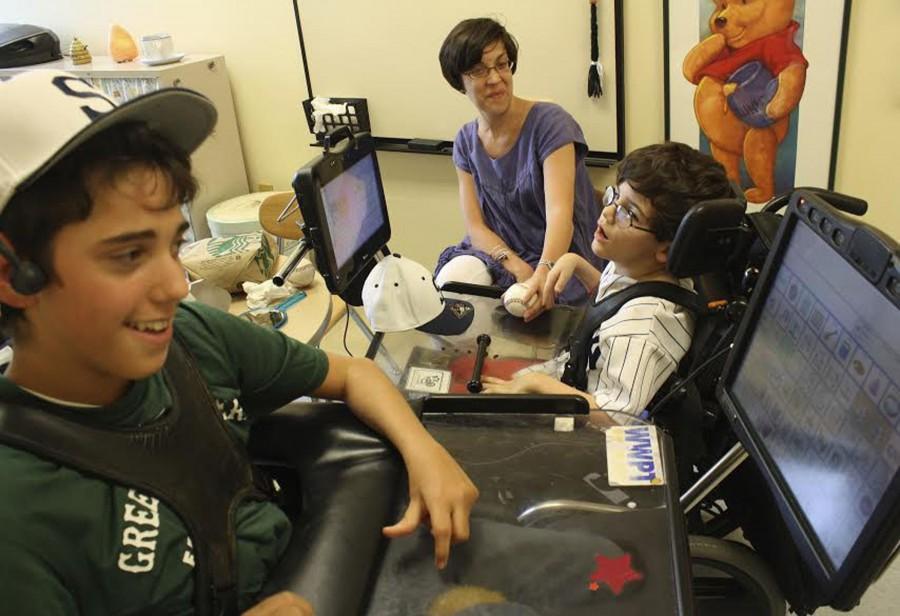 An awkward silence looms in the air between Wyatt Davis ’14 and Harrison Putman during one of their first meetings.

The two of them break out in laughter, and a friendship stronger than stone is formed.

Both Davis’ and Putman’s lives have been affected by cerebral palsy (CP), which, according to KidsHealth, is a disorder that affects muscle tone, movement, and motor skills.

For Davis, it means that cerebral palsy has completely shut down most of his ability to move. Despite his physical shortcomings, Davis has had his own radio show, taken photos for Inklings and won student of the month.

Davis’s accolades caught the attention of Putman, an eight-year-old at Greens Farms Elementary School. The Special Ed departments at GFS and Staples met up and agreed to have a once a week “hang-out” between the two students.

The problem with the two meeting at first was communication software differences; as a result the pair could not have full conversations. But Speech and Language teacher Christine Frederick solved that problem.

“Harrison got his new talker, and we knew that Wyatt used the same set of pictures,  so we wanted to see if they could hang out with each other. At first Wyatt was hesitant, but they had so many similar interests they bonded immediately,” Frederick said.

Sharon Magera Gunther, the paraprofessional for Davis, also spoke of the sessions starting off strong. The bond, she said, “was instantaneous. They are both so alike, both such great people.”

The two boys make every second of their one-hour sessions count as they talk about topics from siblings to sports. They spice up their activities from time to time, playing games like bingo.

Davis has taken on the responsibility of being Putman’s role model head-on as he continues to be an active influence. “One day, Wyatt was playing his radio show, and he wanted to show Harrison what he can accomplish,” Megara Gunther added.

The day before Putman’s birthday, Davis made sure to give him a big surprise. The previous day, Davis threw the first pitch out to adoring fans during Staples’ 2-1 game against Greenwich. He returned to Greens Farms the next day with a game ball, along with a new Staples baseball hat. Putman was thrilled.