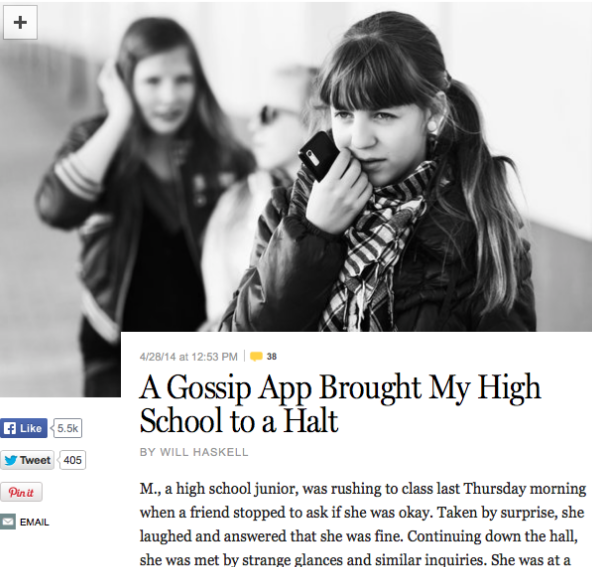 Student reaction was mixed to a Staples senior’s article published Monday about Yik Yak, the controversial app. The article was run online in New York Magazine and was widely distributed on Yahoo, Boing Boing and other outlets.

Will Haskell ’14 wrote “A Gossip App Brought My High School to a Halt”, summarizing the app’s impact and using direct quotes published on the forum anonymously.

While some students felt the article was constructive and useful, others felt that it amounted to more victimization of the original students targeted on Yik Yak.

“I thought it was really well written and accurately depicted the events that took place at Staples,” Ben Goldstein ’16 said.

Others, however, felt that it unnecessarily brought the hurtful posts back to the surface, causing more damage.

Grace Summerfield ’15 was particularly upset. “Inevitably when I was reading Will’s article and saw all the comments quoted, I was angrier than when I saw the Yik Yaks themselves,” she said. “I understand [that Haskell] needed proof, but it was out of hand, ridiculous, and heartless [to bring] a subject to light that was absolutely not needed to be brought up yet again.”

Haskell, when asked to comment on the reason for including the quotes in his piece, explained that the goal of his article was not to embarrass those mentioned. Instead, he wanted “people to be forced to look these posts in the eye” comparable to when a “dog chews something it shouldn’t have. You make them look at it so they can repent and regret.”

He felt that overall, the takeaway of his article should not be the specific posts, but for people to be aware of how cruel and damaging to the people and school climate the comments were. By bringing attention to this, he hopes to spread awareness to others.

“I tried to prevent future teenagers from suffering what Staples’ targets have endured.”