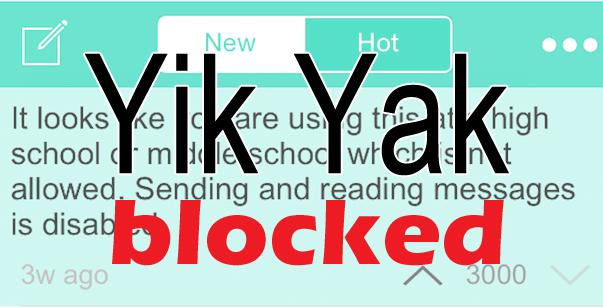 After Thursday’s destructive flood of Yik Yak comments swept Staples, Westport’s administration moved swiftly to block use of the app at all district schools.

“The site was blocked [Thursday] on both the wired (for desktops) and wireless networks. We are also working directly with YikYak to set up a geo-fence around our schools to cover the cellular networks,” Director of Technology for Westport Public Schools Natalie Carrignan said.

The app can still be used outside of school, but unless settings are turned off, the geographical location of the poster is visible.

While many students at Staples were focusing on the posts made on the popular app Yik Yak Thursday, others wondered whether harsh comments could be traced back to the users who made them, despite the promise of anonymity.

Logging into the internet at school requires a student to enter their Westport Public Schools login information, which includes their student ID, so the system can track which users are currently logged into and using the school wifi.

Carignan explained that “when traffic goes out our school network to any site on the Internet, it must have an address so the traffic knows how to come back.”

Although this may cause alarm among some students, Carignan said that while it is possible to detect if a device on the Westport schools’ wifi used Yik Yak, “the message itself is encrypted and unreadable.”

Although Yik Yak has been banned at Staples, it continues to rapidly lure in more high school age users.