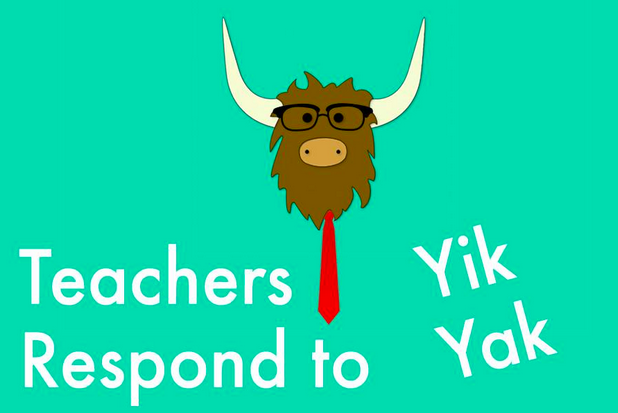 Many Staples teachers noticed that their students’ heads were buried into cell phones more than usual on Thurs. April 24, with “Yik Yak,” an application that has conquered the screens and buzz in the Staples community.

Yik Yak, according to its website “acts like a local bulletin board for your area by showing the most recent posts from other users around you. It allows anyone to connect and share information with others without having to know them.”

Many teachers were apparently unaware of the app initially.

The Yik Yak phenomenon was first brought to Staples math teacher Robin Hurlbut’s attention when, as a parent of an elementary school student, she received an email from Fairfield Public Schools that told her to look on the school system’s website for more information on an app called Yik Yak, Hurlbut said. “I haven’t had the chance to look at the site yet, but apparently it’s a concern.”

Upon hearing that students were targeting fellow classmates anonymously, math teacher Theron Kissinger’s first reaction was, “This is disgraceful. People who go on a site like this to make mean comments about others are so insecure about themselves that their only form of an outlet is to humiliate other people.”

Likewise, Janet Zamary, a P.E. teacher, was shocked. “Oh my gosh, why are kids doing this now?” Zamary exclaimed. “I just feel so bad because it’s gossip that’s never substantiated, because you’re not signing your name, and it’s only going to make people feel bad if they read something about themselves or their friends and peers.”

Another P.E. teacher was upset by the negative use of Yik Yak by students. “I don’t understand how some of the most privileged kids in the state feel the need to be nasty. From the elementary level we teachers nurture you guys by telling you how wonderful you are, we have you sharing stuff, being nice to each other, doing all the cooperative classroom stuff, it’s endless. And when you get to the high school and involved with this app, it’s like all kindness you’ve been taught has been forgotten. It should have been learned by now.”

English teacher Kristin Schultz agrees. “People always say ‘sticks and stones may break my bones, but words will never hurt me,’ but it’s just not true because hurtful words really do affect a person’s mental state. The only thing anyone can say is to rise above it.”