“S” in spring stands for snow, not sun 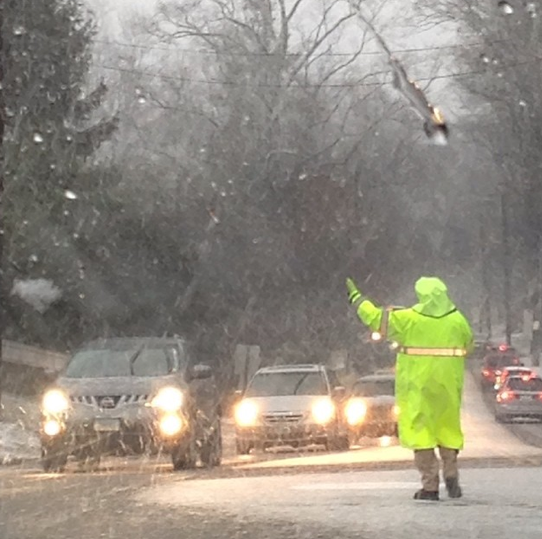 Snow falls as students and teachers make their way to school on March 31, a day that typically doesn't bring snow showers.

Rain, hail, and eventually, snow, pounded down from the sky early this morning and had many rolling their eyes toward the cloudy, milky-white sky, asking “Why?”, including Maggie Brown ’16.

“It feels more like February than it does almost April. It’s annoying – I just want it to be warm, I’m sick of wearing my coat to school,” Sophie Call ’16 said. Her frustration was so high that on a scale of one to 10 of how fed up she was that it was still snowing, Call rated her feelings a “solid 10. It completely ruined my week.”

With such weather so soon after seemingly reaching the light at the end of the winter tunnel, it seemed Mother Nature was teasing with false hopes of a warm spring. “I thought it was April first, and it was a cruel joke. Then I realized it was March 31, and it was just harsh reality,” said Tessa Mall ‘15. “It sucks. The weather sucks.”

Not only were her weather hopes crushed, but also her driving dreams. “I was going to drive to school for the first time today, but I didn’t want to walk from Wakeman in the hail.” Mall is “beyond done” with cloudy skies and icy conditions.

The weather is also affecting the start of the spring sports season. Will Lash ’17 is unhappy about playing rugby out in the snow with shorts and t-shirts. The soggy fields and slippery courts have created problems and caused cancellations for several sports, including lacrosse and tennis.

Winter weather has returned to haunt spring, which Brown described as “dreary and depressing. There’s no springtime vibe.”

“I thought we were almost out of winter, so it’s a little disappointing to be back with the storms. I mean, you can expect it in the winter but it stinks to have it in spring” she said.

Brown said she is ready for summer—or at least spring. “It’s almost April, it should be partly cloudy, sunny, 53 degrees. I should be able to wear jeans and shouldn’t have to wear a jacket, but that’s not how it’s turning out.”