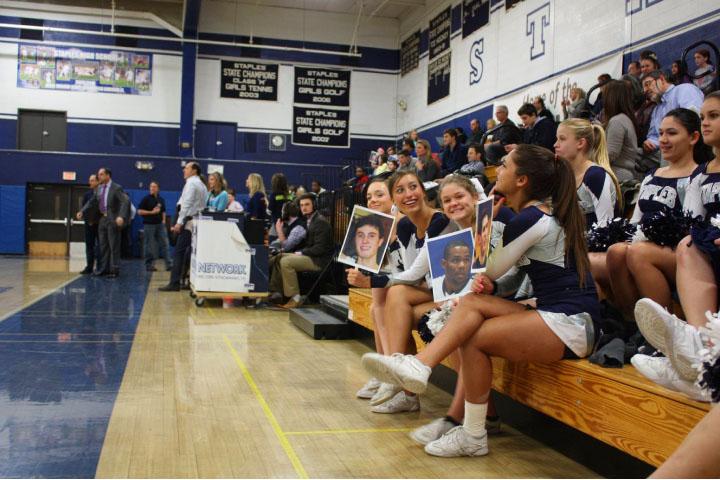 The entire gym is flooded with noise, jumbled with energetic cheers ringing in perfect unison. Encouraging shouts boom from the audience, ranging in number anywhere from 40 to 200 people. As the boys’ basketball team weaves up and down the court, the cheerleaders, the core of the insane energy, do everything they can to boost the atmosphere.
At the girls’ basketball game, the air is filled with the panting calls of team members and the bouncing of the ball against the gym floor. The occasional yells of encouragement and claps only come from the loyal parents and scattered fans. This noticeably scarcer turnout than the boys’ games usually ranges from thirty to sixty people.
When the team struggles, the claps dwindle and the air grows heavier with silence. The teammates on the bench, lethargic from play, take on the role of cheerleaders and attempt to keep up the energy from the sidelines.
“It’s exciting to have a bunch of people watching and screaming for you. It gets you pumped, unlike silence where one might feel like they are playing for nothing,” Emma Mikesh ’14, cheerleading captain, said.
The spirit that the cheerleaders contribute to a game is undeniable, yet they only cheer for the boys’ basketball and football teams. The JV team used to cheer for girls teams, but now that there is no JV team, much of the cheerleaders’ time is consumed by their own practices, along with their support of the two boys’ teams. There are other schools in the area that cheer for teams of both genders, though Staples is not one of them. The teams Staples does cheer for, however, see a significant difference.
“It helps us by adding to the atmosphere and have it buzzing. I think it would only benefit the girls in the same way which is to add to the fans so that the atmosphere isn’t dead,” boys’ basketball captain David Katz ’14 said.
Football players had a similar outlook on the cheerleaders.
“I think cheerleaders are a great advantage to have for a team. They bring larger crowds to games and keep fans excited,” football captain Jack Massie ’14 said.
Every player knows that in the last fleeting moments of a tough game, players are weary and exhausted. When the energy levels of the players grow sluggish, hearing the encouragement from the cheerleaders and audience members prevents thoughts of exhaustion from creeping into their brains, athletes said.
Lacking this tireless vitality from the cheerleaders could potentially put girls’ teams at a disadvantage
“They are just a very positive group that helps the team when we are feeling low on ourselves during a game,” basketball captain Darryle Wiggins ’14 said.
He adds with confidence, “I am sure it would have a positive impact on the play of the girls’ team.”
“When you know you are being supported, it motivates you to please the ones cheering for you,” cheerleader Olivia Consoli ‘16 said.
This helpful spirit does not go unnoticed by teams, or even their coaches. Girls’ basketball especially feels the loss of energy, since the boys’ team enjoys the benefits of the cheerleaders. Coach Karen DeFelice, thebasketball assistant coach for the girls’ varsity team, comments that having cheerleaders would “certainly help” since she feels it “just creates a better atmosphere at a home game and more energy in the stands.”
DeFelice added that she’s observed the difference firsthand saying, “I’ve seen when other schools do it, and I think that it creates a good home game atmosphere.”
Some of these other FCIAC schools include Ridgefield, Danbury, St. Joseph, and Bridgeport Central.
Ridgefield has made it mandatory for the cheerleading squad to attend five girls’ basketball games. While they attend all boys’ home games, and only selective girls’ games, it is still a compromise. However, at Staples, no such rule exists.
This wasn’t always the case.
“We used to have the JV cheerleaders do some of the girls’ basketball games. The problem we face now is that we only have one team. The numbers have dwindled,” Athletic Director Marty Lisevick said.
Lisevick also accounts for the cheer team’s rigorous practice schedule. They won 2nd place in the FCIAC last year and are continuing to compete. Between games and practicing for competitions, the team simply cannot cheer for both genders.
“They also have their own competitions so they are constantly training in the winter. Giving up two days a week for basketball games is infringing upon their ability to practice for those competitions,” Lisevick said.
Cheerleading coach Avery Watson has a simple argument.
“We cheer for the boys’ team because that is what the team did when I took over the position as head coach. There isn’t anything more to it,” Watson said.
Some argue that, since only the boys get the cheerleaders, it could be viewed as unfair.
“I believe that in a way it is sexist that the girls don’t have that group during their games while the guys teams do, because they really can help a team’s moral, to a certain extent,” Wiggins said.
While cheering for only the boys’ sports is viewed by some as sexist, others disagree.
Nick Ward ’14 has a slightly different view than, “it may be sexist that they don’t cheer for girls’ teams, but I don’t think that any of the girls’ teams would really want cheerleaders. I think that cheerleaders traditionally go to football games,” he said.
Emily Stanford ’14, a girls’ basketball team player, has experienced playing without cheerleaders firsthand. She argues definitively against the opinion that it could be viewed as sexist.
”I don’t think it’s sexist at all. There’s nothing wrong with having the cheerleaders at boys’ games instead of girls’ games,” Stanford said.
Whether it is defined as sexist or not, there’s no denying that when it’s fourth quarter and the clock is winding down, everyone, male or female, could use a little extra encouragement.
Massie sums it up simply, “hopefully the cheerleaders will be able to cheer for girls sports in the future.”