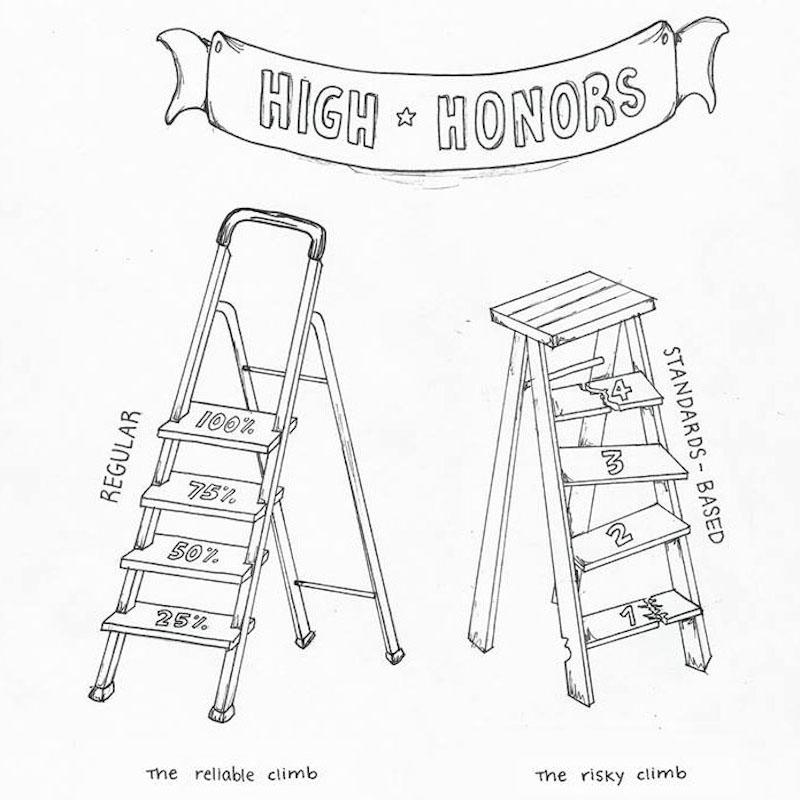 Ayden Schattman ’16 was doing great in Algebra when suddenly her grade came crashing down. Did she fail a test? No. She received a two on one strand of the topics her class tested on throughout the semester.

Schattman is in one of the classes that began using Standards-Based Grading—a system where each skill is considered a “strand” and students take tests on various strands at a time. The student is then given a grade of one through four, based on how much the teacher feels they have mastered the topic. Receiving anything less than a three makes it impossible to receive an A.

“That one two brought my grade down a lot, and with average based grading, not doing well on one small topic would not affect my grade at all,” says Schattman.

But there are various chances throughout the year to reassess (and therefore change the grade) on up to five strands at a time.

After experiencing this new form of grading for over a semester, many students agree that there are various pros and cons, but disagree on which system is better overall.

One of these students is Maggie Brown ’16. Brown says while her feelings about the system haven’t changed, they weren’t great from the start, “I didn’t love it at first and don’t love it now.”

Schattman added “It seems a little ridiculous to me that you could master 70/71 standards and not have an A in the class. I would understand why you wouldn’t deserve an A+, but that’s why there are different level A’s within the A range. I’d rather be on a regular grading system.”

Danielle Johnston ’16 is a student in a math class that is using the new grading system and feels that there are some pros to it. “Standards-Based Grading is good because it helps students pinpoint specific areas in which they need to improve on through the process of retesting on those certain areas.”

This is a part that students in the survey said they liked. Almost all students surveyed said that they find it helpful in showing the student exactly which areas they are struggling with, therefore representing their knowledge more accurately. Almost all students also agreed that being able to reassess is the other major upside to this grading system.

Shannon Barry ’15 likes the reassessments because “you can always improve your skills and  it ends up really helping your grade go up because of all the opportunities you have to retest.” Barry also thinks that some “people have stress only because you have to retain all the strands because you never know when they will appear,” Barry said.

Barry is referring to one of the only things that students have complained about with the retesting: the fact that other strands that didn’t need to be retested on could appear on the reassessment test. Therefore, while you have the opportunity to raise the grade of one strand, the grade on another strand could also go down unexpectedly.

Another frustration for many students is that homework and participation are not counted, which many of the students surveyed said are important keys to succeeding in the course. Some added that when homework is not counted, it’s more difficult to motivate yourself to study.

Math teacher Ann. Didelot is using Standards-Based Grading in some of her classes. “I think that it is a good system that works well for some classes and not as well for others.”

Student Diego Alanis ’14 agrees with this, “I like it. In my opinion it is much easier to get a better grade when compared to normal grading. I feel like mostly everyone likes it and those that don’t haven’t figured out how to use it to their advantage.”