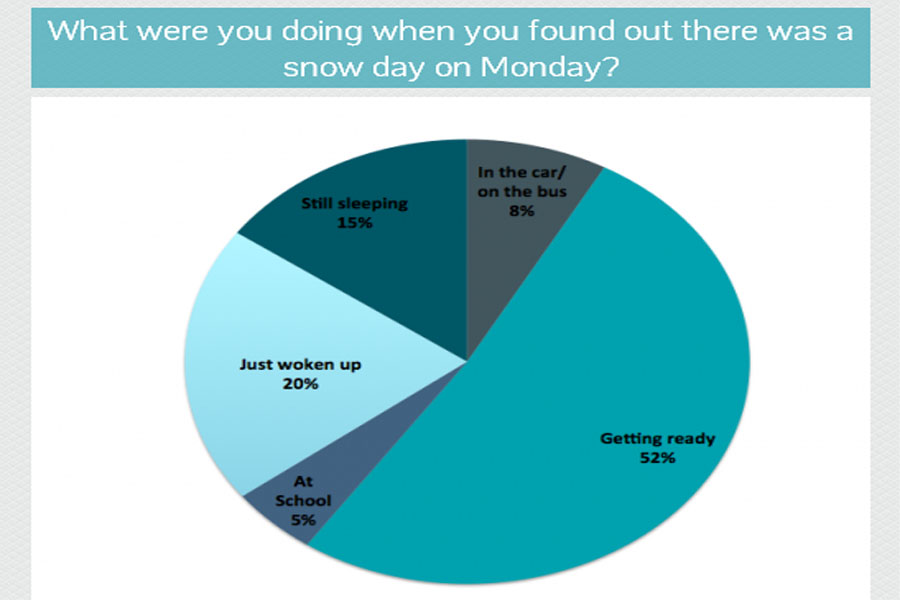 By the time students and teachers found out about the snow day on Monday, most were already awake and dressed, and some were actually at or on the way to school.

The late decision drew a lot of criticism, especially since many teachers face long commutes made more difficult by bad conditions.

With another storm predicted tonight and Jacob Meisel’s Southwestern CT Weather already declaring an 80% chance of a snow day, some students are considering how tomorrow morning is going to play out.

“I’m going to stay in a bed a little later just in case he calls it late,” said Alexis Iannacone ’14 who was already on her way to school on Monday when she got a text about the cancellation.

A poll of Staples students showed that bout 78% agree with this tactic, saying they are going to delay waking up or wait until the last minute before leaving in case there is another late phone call.

Rachel Beck ’15 is taking the middle path, prepared for all possibilities.

“I’m probably going to do my homework tonight, but I won’t set my alarm tomorrow,” Beck said. “If there is school, I’ll have my mom wake me up.”

Parents made good alarm clocks in this situation: they will adjust to the snow day decision. The poll showed 46% of Staples students plan to have their parents wake them up if there is school.

Of course, some people think the whole situation would be simplified if Superintendent Elliott Landon made his decision quicker.

“I think he should just call it earlier this time,” said Victoria Loiacono ‘14

Of the students polled, 81% are expecting a snow day tomorrow, but with Landon’s reputation in mind, 78% have made plans in case of a late decision.

One anonymous respondent has a strategy to cover all possibilities.

“I’m not going to school,” the student wrote. “Landon’s decisions are irrational and dangerous.”