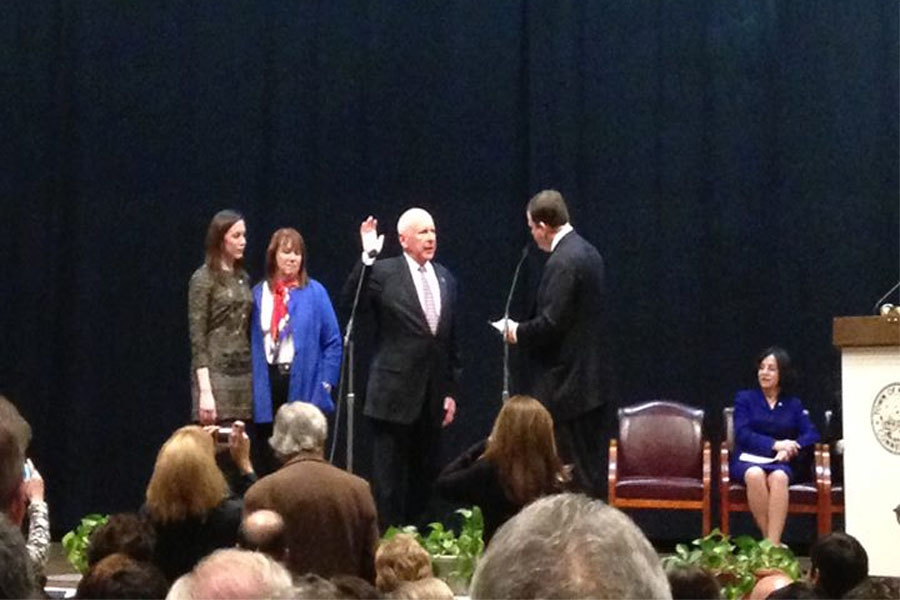 On the night of Nov. 18 at 8 p.m. the First, Second, and Third Selectman, along with many other town officials, were inaugurated in front of an audience of about 400 Westporters at Town Hall.

The night began with a welcome introduction from the town’s past First Selectman, Gordon F. Joseloff, who praised the town on its nonpartisan behavior, as he is a Democrat and the new, incoming Selectmen are both Republican.

The local Boys and Girls Scout troops and Eagle Scout troop came to help recite the Pledge of Allegiance, and later the Staples High School Orphenians sang the National Anthem along with another musical selection.

“I think Marpe and Kaner are great for our town because they have a lot of experience between their participation on the Board of Finance and the Board of Education,” Jacqueline Chappo ’15 said. “Also, their knowledge from living here with kids growing up in the schools will make them that much better at their job and ultimately improving our town.”

During Kaner’s closing remarks, he told the audience that his core principle would be non-partisan consensus, and his goal is to make Westport one of the top five best places to live in America.

Marpe had the final speech of the night, during which he talked about his goals to represent all the people of Westport equally.

“I will focus on what we have in common rather than what divides us,” Marpe said.

Marpe, along with the many other elected officials, hopes to better the town and increase town participation in local government.

“Government by itself can only do so much,” Marpe said. “ Please join us.”