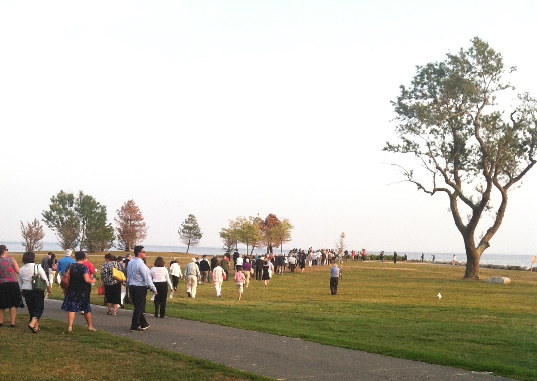 It was a beautiful but sorrowful evening at Sherwood Island. While the setting sun was falling over the horizon, the Connecticut community gathered together to pay respects to the ones lost during the horrific tragedy that occurred on Sept. 11, 2001.

As the ceremony began, every family in attendance was given a white rose along with a program. The program listed the names of those from Connecticut whose lives were taken on that day. The ceremony began promptly at  5:30 p.m.

“Today, we have come here to be united in our pain and our search for compassion and comfort,” said Daniel Esty, commissioner of the Connecticut Department of Energy and Environmental Protection.

What  followed was the introduction of members of the clergy, state officials and armed forces.

Shortly thereafter, speakers were invited to read the victims’ names. One by one, 160 names of those lost were recited.

“A special prayer for my own husband, Richard M. Kleane,” said Judy Kleane, completing the list of names.

Following the speakers was a moment of silence. As heads slowly lowered, mourners were given the chance to reflect on their loss and bring themselves closer to their loved ones. The silence was then broken by the U.S Coast Guard Cadet Glee club, who sang “American Tears.” As tears rolled down the cheeks of those who lost so much, they turned to the community for support.

While the choir was singing, two lines were formed as the attendees were directed towards the other grass with flowers in hand. This memorial was made out of stone which was located on the grass. Fighting back the tears, family members placed the roses by the names of those lost. After the last rose was placed, the stone memorial created a garden of white roses, which seemed to bring life to the beautiful ceremony.