Record Breaking Rain, Snow and Storms: A look back at years of crazy weather 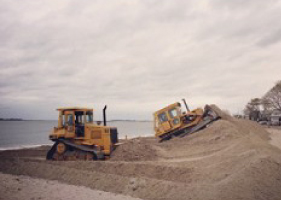 Few have forgotten about the nor’easter that came in March 2010. High winds caused trees to fall all over the northeast, cutting power lines and putting lives at risk. It was difficult, if not impossible, to go anywhere in the week following the storm without seeing a fallen tree or wire. “My friend’s house was hit by a 100 foot-tall tree,” said Jakub Hrvacic ’13. Many others’ homes were blocked similarly, and one Westport citizen died. This storm led to three days of no school for students. “I spent some of the time cleaning my yard and helping my friends clean theirs,” said Hrvacic.

Hurricane Irene hit in late Aug. 2011, delaying the opening of Westport Public Schools from August 30 to Sept. 1. While some students were excited about the late opening, others were anxious to be home and to begin a regular routine. “We lost our power early and had to stay at my twice-removed step-uncle’s house. He had power but only played the Plain White T’s on his walkman and reruns of ‘The Big Bang Theory,’” Max Rubin ’13 said. The experience wasn’t quite so miserable for some other students. “Hurricane Irene gave me time to finish my summer work and hang out with my friends. We all came together at my house because we have a generator,” Haley Zeldes ’13 said.

Otherwise known as “Snowtober,” the Halloween nor’easter of 2011 moved Halloween to a later date in Westport, crushing the spirits of children all around the area. Of course, the “new” Halloween date couldn’t compare to the usual Oct. 31 tradition. Some houses were no longer giving candy because of the confusion between the two dates. “I went trick or treating on regular Halloween, and no one was giving candy,” Griffin Noyer ’13 said. This storm not only interfered with Halloween, but caused an especially memorable homecoming game. Staples’ win over Darien was barely visible through the awful weather caused by this nor’easter.

Many students were thrilled to miss five days of school because of Hurricane Sandy back in October 2012, but this storm was nothing to celebrate. Power was out, homes were destroyed and lives were lost. “We had to walk through knee-high water to get to our house the day after the storm. My basement was flooded, and there was sand in my front yard for months; at the beginning, it was about a foot high,” said Lucas Carstens ’13. Carstens is one of many whose road to recovery after the storm was long and seemingly endless. The storm did, however, call for a togetherness between family and friends that may not have been seen otherwise. “We rented a bunch of movies and watched them together on my laptop,” Joanna Arcee ’13 said.

You certainly didn’t need to search for the Nemo that rolled in on Feb. 7, 2013. Bringing about 20 inches of snow to Westport, Nemo caused public schools to be let out early on Friday, Feb. 8 and closed the following Monday. Piles of snow were so thick that if one wasn’t careful, one could disappear in his or her own snow angel. Students were certainly not the only members of the Staples community affected by the storm.  “The top of the hill of our neighborhood looked like a giant had come through on a leisurely walk and just swatted down all the trees,” special education teacher Rebecca Anderson-Furlong said. The intensity of the situation called for extreme measures. “The oddest thing for us was seeing the National Guard in the neighborhood. We would bring them coffee, cookies and doughnuts as a thank you for just trying to help the community through yet another major storm,” Anderson-Furlong said. This is just one of the many examples of communities coming together to assist during times of crisis.