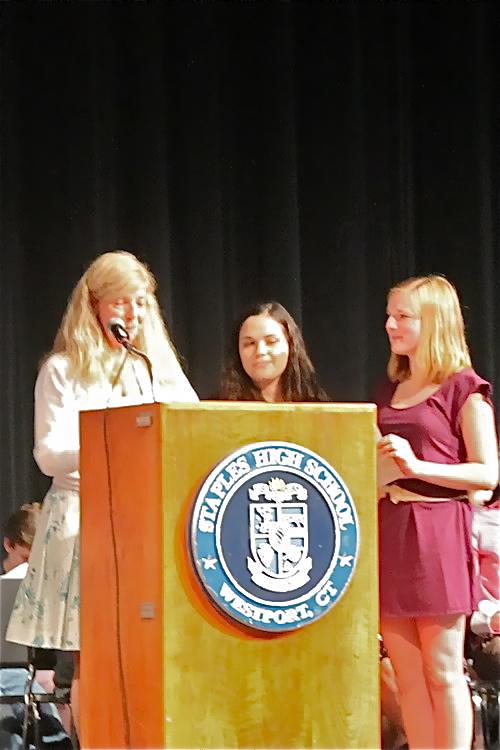 “Legends,” is just one of the words that pottery teacher Jaclyn Jeselnik used to describe some of her students. Today, Thursday, May 30, she chose to recognize seven of her best potters for “Excellence in Pottery,” just as many other elective teachers recognized their finest students at the annual Departmental Awards Ceremony.

The Departmental Awards Ceremony, which was held in the auditorium, recognizes students who have shown particular talent and enthusiasm in the Fine and Performing Arts, Family and Consumer Sciences, Media, Music and Technology.

“Our students are being honored today because they have found what makes them come alive,” said Karyn Morgan, chair of the Fine and Performing Arts department.

Morgan also emphasized the role that each teacher plays in helping students improve in what they love to do, which was shown by all of the teachers as they announced the students they thought were tops.

Drawing teacher Camille Eskell praised each of her students. She pointed out one of her students, Michael Abrams ’14, who “lives and breathes art,” while singling out another student, Paige Cooper ’13, who “just brings utter joy into the class.”

Students were also pleased to be recognized by teachers they had a close connection with. “It’s wonderful because Ms. Eskell is awesome,” said Sophia Green ’15.

Adam Mirkine ’13, who won the John Philip Sousa Band Award, felt the same way, recognizing his band teacher, Nicholas Mariconda, as having been “a great mentor over the past few years.”

Teachers also felt a strong connection with these students, more than simply teaching them a curriculum. Child Development teacher Linda McClary said her students were part of her “family.” On letting her graduating seniors go, she said, “This is hard for momma.”

“You are the number 056 on the IPR list: ‘sparkles like a gem,’” she said of her students.