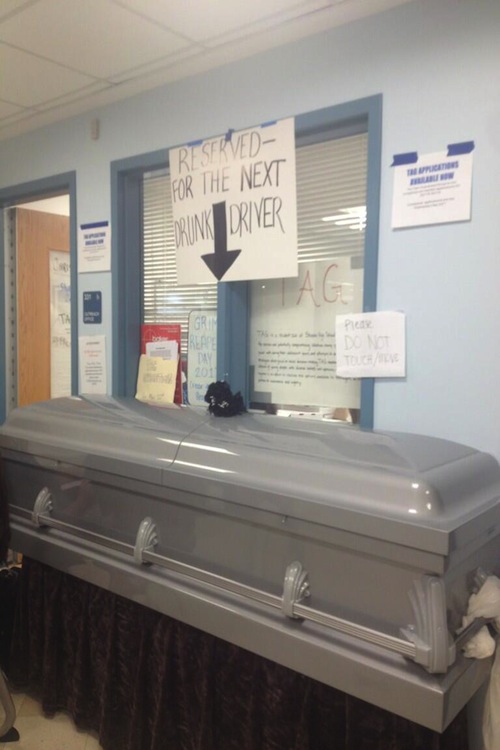 On Grim Reaper Day, TAG placed a coffin outside the cafeteria to show students the consequences of drunk driving.

Every year, the Teen Awareness Group (TAG) organizes Grim Reaper Day, a day to raise awareness of the dangers of drunk driving. In the past, TAG has displayed a coffin outside of the cafeteria; however, it decided to remove the coffin in 2006 to show respect to students who had suffered the death of a parent from causes other than drunk driving.

This year, TAG and the rest of the administration voted to display the coffin outside of the cafeteria again.

“The intended effect is to give a figurative representation of the possible fatal consequences of drinking and driving,” said TAG Advisor Chris Lemone.

TAG President Lily Rappaport ’13 also agreed that the point of the coffin is to emphasize to students the dangers of drunk driving.

“Death in general is a sensitive subject, but the point of Grim Reaper Day is to prevent more deaths,” said Rappaport. “We hope that the sight of a coffin will resurrect the stories told by our speaker and the stories and messages told in our documentary.”

Principal John Dodig supported the return of the coffin and believes it is important to deliver a strong message to students before the upcoming junior and senior proms.

“The overall purpose of the TAG-sponsored Grim Reaper Day is to make abundantly clear to young drivers that use of intoxicants and use of cell phones for texting while driving can and often does result in severe injury or death,” said Principal John Dodig.