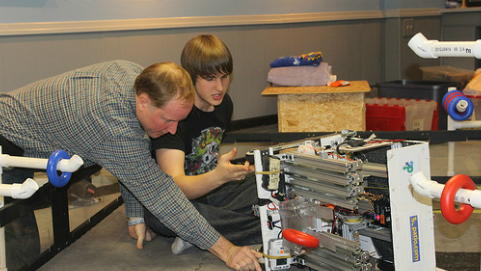 The challenge for this year is called “Ring It Up,” in which teams build a robot that can move rings onto pegs.

“They always use horrendous puns for the challenge names,” said Alec Solder.

The matches are divided into a 30-second autonomous period, in which the robots are controlled by a computer program, and a 2-minute driver-operated period.

During the autonomous period, the goal is for the robots to hang special rings on pegs located on the center rack, a three-by-three vertical grid with pegs on either side. If they do, they’ll own that peg for the whole match. If they hang the ring in a column that has an infrared beacon (a beacon that gives off infrared light that the robot can detect), they’ll also get a 50 point bonus.

During the human driver-operated period, the goal is for robots to hang rings on pegs. They get five points for hanging a ring on the bottom row, ten on the middle row, and 15 on the top row. They can also get points for getting three pegs in a row, which is worth 30 points.

“If I mess up, everyone’s hard work has gone to waste,” Alec Solder said on driving the robot. “It’s a bit nerve-wracking.”

However, John Solder expressed confidence in his son, saying, “Alec is really good under pressure.”

Fantini also felt the pressure but said, “I can handle it.”

However, all the preparation in the world would not help the team avoid a bad partner team. During the matches, teams compete in alliances of two teams, and the teams in each alliance are picked at random—said Alec Solder, “It’s a crapshoot.”

Last weekend, Wrecker Robotics went to two competitions: one at Pace University in New York and a qualifier competition at North Andover High School in Massachusetts for their state championships.

At Pace University, they came in third place, “mostly because of human error,” said team member Eric Pan ’14, but they’ve learned from their mistakes.

“Things kept breaking or not working, and we had to keep fixing them in 15 minutes before the next round,” he said.

In order to get to the World Championship in St. Louis, Missouri, which will be held in April, they need to come in first at a state championship or win the Inspire Award at one of them. Besides the Connecticut and Massachusetts competitions, they’ve also got a shot at the Vermont State Championships, on Feb. 23, and the New York City Championships, on March 8.

The team has high hopes. “Our design is one of the best designs I’ve seen,” said Max Liben ’14.