Breathe In, Breathe Out: The Cigarette Confessions 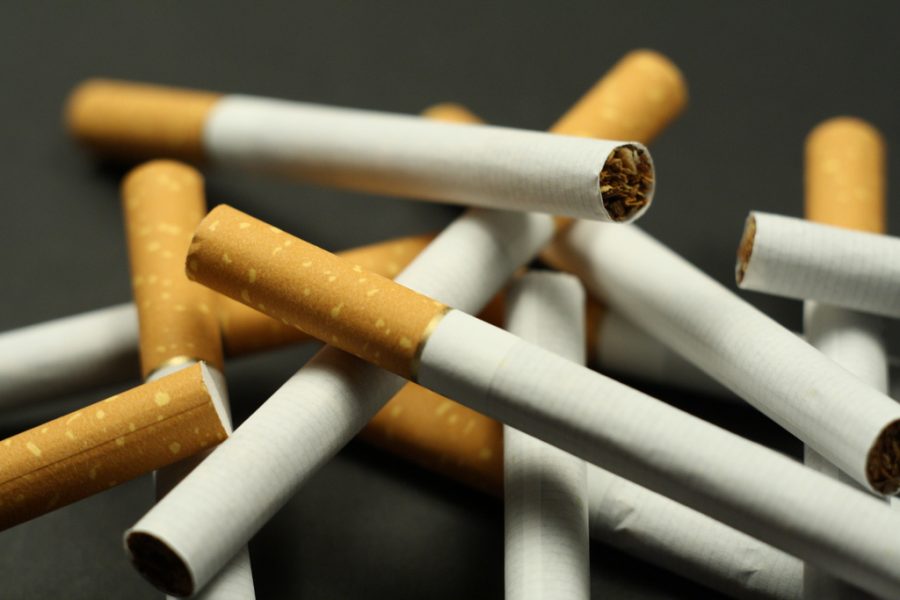 The inherent danger of cigarettes is so widely known. Packets of cigarettes are emblazoned with striking black-and-white letters stating not that cigarettes can cause cancer but that they do, in fact, cause cancer, as well as other bodily complications:

Students in Westport are hardly strangers to this information. Year after year, the D.A.R.E. program makes its way to each and every fifth grade classroom to stress, among other things, the danger of cigarettes. Middle school health classes continuously emphasize the risks of tobacco. Yet a sizable percentage of Staples students choose to smoke cigarettes.

“You would think that in this day and age, more people would stop smoking,” health teacher Laddie Lawrence said. “But there’s still a pretty high number of smokers.

In fact, students who agreed to be interviewed for this story acknowledge that they know the risks of smoking cigarettes.

“It’s weird, because when it comes to tanning beds, for example, I freak out at my friends for using those because they are so bad for you. So I guess that I’m a little oblivious,” an anonymous smoker said.

According to the Westport News, a 2011 survey conducted by the Governor’s Prevention Initiative for Youth, which polled approximately 1,000 Westport teenagers, found that 11% of juniors at Staples reported smoking cigarettes.

Some smoke as a form of rebellion. Some smoke socially, after parties and while spending time with friends. Some have more regular smoking habits, using cigarettes as stress relievers.

Welcome to the Cigarette Confessions.

For the purposes of this article, nearly a dozen sources were approached, but most declined interviews, sometimes hinting at a fear of judgement by family and friends. Three sources ultimately agreed to be interviewed.

One source is an athlete, a junior girl who calls herself a “party-smoker,” and says that she only smokes when she is around other people in social situations. One is a musician, another junior girl, who smokes in what she calls a “social” manner. One is a senior boy who smokes cigarettes “almost every day,” even at school, although he said that the punishments for doing so are “stupid and outrageous.”

Each source began smoking cigarettes in a different way, and each source has different smoking habits.

“The first time I tried a cigarette, I was actually with my parents. My dad was like, ‘Try this,’ and I coughed for an hour and swore that I would never do it again,” the athlete said. “Then two years later, in ninth grade, I tried it again. I started smoking once in a while at parties, and it later turned in to almost every time I go out.”

The senior said that he had started smoking “at a really early” age. However, the musician had never smoked before November of 2010. Even now, she said, she doesn’t smoke often. “A rough estimate is about a couple times a month, often less.”

How friends react appears to depend on the friend group. The senior’s friends don’t seem to mind, he said, perhaps because he began so young. The athlete’s friends, however, do not feel the same way. Most of her friends do not smoke cigarettes, and many do not agree with her decision to smoke.

“I have a couple of friends who find it disgusting, and others that tell me that they just don’t want me to get addicted,” she said.

However, the musician made it clear that she smokes cigarettes in a purely social manner, and never spends money buying them.

“I’ve never purchased or owned my own cigarettes,” the musician said. “When I smoke, I am with other people and bum off of them.”

The athlete explained that she obtains cigarettes in a number of ways. Sometimes she has friends that are legally able to buy cigarettes get them for her. Other times, she goes to gas stations around town to buy cigarettes, which she said, “only works once in a while.”

When asked how he obtains cigarettes, the senior said, “I’m 18, so I go to a gas station.”

All three feel differently about why they choose to smoke cigarettes. When asked why cigarettes are a part of her life, the athlete responded, “That’s a tough question.” She later went into further detail.

“It’s soothing, calming and relaxing. Sometimes if I’m stressed I think, ‘Man, I could use a cigarette,’” the athlete said. “It’s hard to explain, but I just get such a chill feeling from it.”

The musician does not classify herself as a “rebel” but rather as someone who enjoys the occasional cigarette. There is, she said, “an undeniably tantalizing rush of doing something ‘bad.’” In the end, however, cigarette smoking is for her, “merely a stress reliever and bringer of pleasantries.”

Such pleasantries, however, come with proven consequences. While the senior understands that cigarettes cause serious health issues, he does not see this as a reason to stop smoking.

“I don’t care about the risks, but I know what they are,” the senior said.

The athlete echoed this train of thought. She understands that serious health risks are associated with cigarette smoking, but chooses to smoke anyway.

The Staples Code of Conduct, a form which is signed by athletes, musicians, and many others clearly states that students are prohibited from smoking cigarettes: “No possession, sale, and/or use of tobacco products.”

Many believe that signing the Code of Conduct implies an understanding of the guidelines outlined within it and relinquishes the right to smoke cigarettes and use tobacco products. However, the musician, along with many others, chooses to disregard the Code of Conduct, a decision that she understands could result in suspension from her extracurricular activities.

The student’s parents are oblivious to her smoking habits. When asked what her parents would do if they were to learn of such habits, the musician said, “I would probably be punished for the rest of my high school career.”

However, she believes that neither the risk of her parents finding out nor the health risks involved with cigarettes are good enough reasons to refrain from smoking.

“Of course the health risks have crossed my mind. I’m neither oblivious nor ignorant to the obvious lethal elements of cigarettes,” the musician said. “But because I only engage in smoking from time to time, it’s not one of my primary concerns.”

This lines up with a common theme among cigarette smokers at Staples. Not only are there D.A.R.E. and health classes, but there are also Surgeon General Warnings and other heavily-publicized medical reports

“I think that the bad effects of cigarettes are well known,” Dan Haroun ’12 said.

Cigarette smoking still exists in small pockets across the social web of Staples. Some students smoke cigarettes, others do not. Some take issue with smoking cigarettes while others could not care less. It is undoubtedly a dangerous personal choice, but it is seen as a personal choice nonetheless.