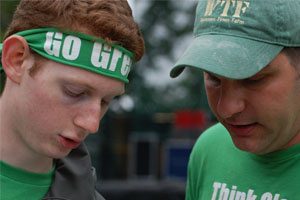 An abundance of controversy was stirred up at Wakeman when its tenant farmer and manager, Staples environmental teacher Michael Aitkenhead, along with his wife and two small children, stepped down from running the farm.

The farm, situated next to Bedford Middle School, was run by Green Village Initiative, a non-profit organization that promotes energy conservation, organic farming, and eco-friendly living. GVI leased the farm fromWestportTownfor $1-a-year and had a contract with Aitkenhead, who lived in the 120-year-old farmhouse with his family and turned the 2.2 acre piece of land into a fully functional farm that was open to the community. Internships were open in the summer and workshops were offered to educate the public in sustainable living.

The problems at Wakeman began when it was reported that members of the GVI Board of Directors had problems with Aitkenhead’s management of the farm and that he had been offered a new contract without the knowledge and approval of all 25 directors.

Dan Levinson, chairman of GVI, claims that those statements are false. He said that the entire board had voted on renewing Aitkenhead’s contract and that “the vote was nearly unanimous except for the five members that eventually resigned.” Those members included Sherry Jaegerson, Marty Yellin, Cathy Talmadge, Liz Milwe and Peter Wormser. We were unable to reach any of the former board members by press time.

Levinson said that some of the members stepped down from their positions because they were part of the GVI Founders’ Team and that they were unhappy with the result of the vote. According to GVI’s website, Jaegerson and Milwe were two of the founding members of GVI.

Levinson went on to say, “There are 25 members (of the board) total and 80% did not step down” and that “the people who stepped down were not active with us.”

In an email, Mr. Aitkenhead said, “My wife and I valued out time there. We are proud of the work we did and miss the farm very much.” He went on to say, “More than anything we miss the community inWestportthat had become such an integral part of our life, and we want to thank the community and all of our friends for their incredible and inspiring show of support throughout the summer.”

When asked about his contract, Aitkenhead said, “While there is some suggestion being made by some that my family and I chose to leave, I’d like to express that this is not the case.” He said, “We embraced our role at the farm and we were looking forward to spending many years there building our lives and acting as stewards of the farm.”

Levinson stated that many rumors and lies were spread by different sources regarding the events that occurred and said that the “behavior of those people is unacceptable” and that “that is not what GVI is about.”

Through meetings with Second Selectwoman Shelly Kassen, Levinson and the rest of the board of directors decided that the best decision for the farm was to turn it back over to the management of the town. Levinson described GVI as a “change agent.” He said that GVI invests money into different projects such as school gardens and town farms and then once ready, they are turned back over to the community.

The media and press played a large role in the circulation of these events, and in some cases rumors. One blog in particular, Staples soccer coach Dan Woog’s “06880”, drew a lot of attention from the public. Woog said, “I was very surprised that I got the story first. There wasn’t anything in the local media, and this was several days after it had happened.”

Woog went on to say, “other blogs hadn’t picked it up so 06880 was the only place to go for news on what had happened.”

The posts began to draw the attention of more and more people and with those views came comments. Woog said, “Because you don’t have to register to comment on my blog people felt that they had a real voice.”

The comments ranged from praising GVI to bashing the organization for letting go of the Aitkenhead family. Some comments went so far as to criticize Levinson’s character and personality. Woog said, “On my blog, posts are not moderated and very, very rarely do I delete a post and I deleted one or two that attacked Dan personally.” He went on to say, “they had nothing to do with the farm but his character and personality.”

All of the emphasis surrounding this topic had an effect on many Staples students. Caroline Foster ’12 and Shweta Lawande ’12, the Club Green co-presidents, were shocked when they heard that Aitkenhead would no longer be managing the farm. Lawande said, “I can’t imagine anyone better suited for the job. Mr. Aitkenhead set a great example for the rest of the town to follow.”

Foster was just as shocked as her co-president. She said, “I felt he (Aitkenhead) was doing a really great job managing the farm and all of the programs that came along with it.” Foster also commented that Aitkenhead is “an incredible educator, and I learned so much from him in the classroom as well as whenever I went to see the farm.”

Lawande said that her biggest concern with returning the farm to the town is finances. She said, “The farm runs on a budget, and if the town isn’t able to raise enough funds, we may not be able to utilize its full capacity as a town center that brings the community together through the promotion of local food production and the education of town members on energy conservation and other eco-friendly practices.”

While the farm has officially been returned to the town, Levinson stated that GVI still has big plans for the future. He said, “GVI is growing like a weed. We have 20 school gardens and are planning for 30 more in the next year in places such asBridgeportandHartford.”

Despite Wakeman now being town-owned, Levinson assures that GVI will still be a present force with the farm and that they will be willing to provide advice. Of the farm, he said, “We’re not ditching it, and we’re not running away.”