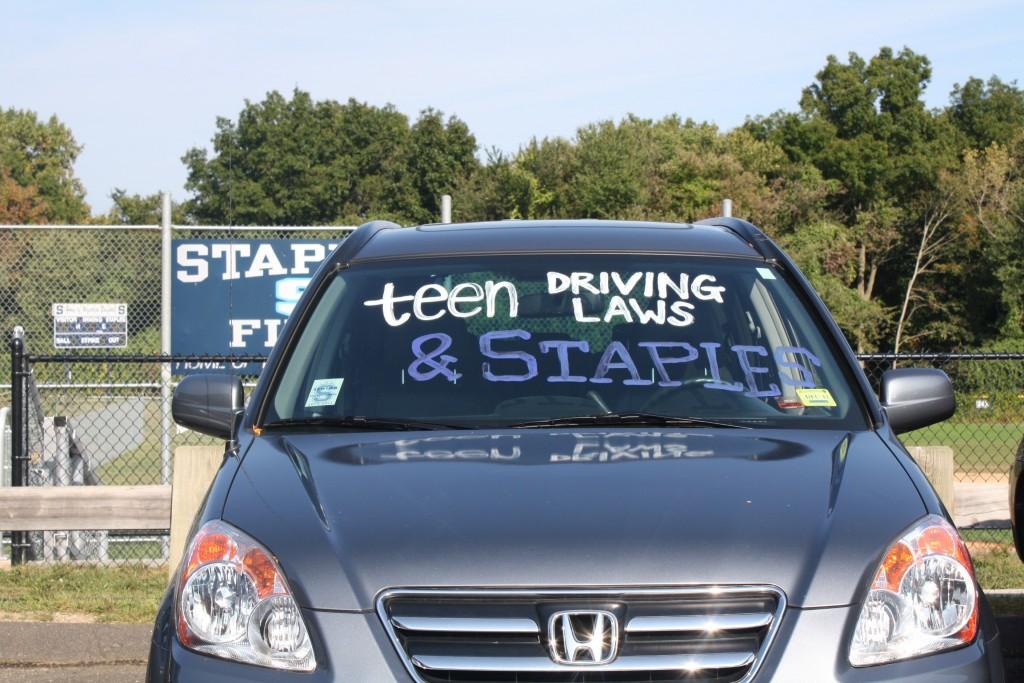 RIDIN’ DIRTY: Under Connecticut Gov. Jodi Rell, the driving privledges of teenagers have been restricted. However, some Staples students do not follow these rules. | Photo-graphic by Annie Nelson '11

Since July 29, 2009, Maddy Fass ’11 has been licensed to drive. She is now legally allowed to have passengers in the car with her.

However, Fass did not wait until she was licensed for an entire year until she drove her friends.

According to the Conn. DMV website, the law restricts “16/17 year olds who obtained a driver license on and after 8/01/08” from driving with passengers other than “immediate family members” for the first year, Fass does not see its relevance.

Many Staples students agree with Fass, and choose not to follow the current rules.

Along with Colwell, Panagiota Tsilfides ’11 did not obey the law because she “didn’t like it.”

She continued to explain how she “doesn’t think the law is necessary. If the driver has consent from his/her parents and the passenger, then it should be okay,” she said.

Although numerous teenage drivers have consistently broken the passenger law, they are not exempt from its consequences.

A teen driver, who chose to remain anonymous, explained how, although he knew the consequences of breaking the law, he still chose not to follow it.

“Losing my license was extremely inconvenient and it was completely avoidable,” he said.

Another commonly broken teen law regards a driving curfew. Teenagers must follow the curfew law “until [their] 18th birthday, [and] may not drive between hours of 11 p.m. to 5 a.m. unless it is for employment, school, religious activities, or a medical necessity, the DMV website reports.

And no, coming home from an eleven o’clock movie does not count as an exception.

“A little before midnight, a cop pulled me over for a seatbelt check. He asked me how old I was, and it just went downhill from there,” an anonymous 17–year-old driver said, who got his license suspended for driving after a movie past 11 p.m.

“It is in no way worth it to break the law. The 30-day suspension that I had to face made my life extremely taxing and difficult.”

Another student also experienced the penalties of breaking the curfew law when his license was taken away.

“I drove after curfew because I left somewhere late and decided to stop at the diner. It was definitely not worth staying out the extra time if I knew I was going to get caught and have my license suspended,” said Jon Camche ’11. “Not having your license is like taking your freedom away. Only in an emergency will I ever drive after curfew again.”

For some it may take a cop standing at their car window to realize what the reality of the situation is.

But some agree that it is not worth the risk, and can easily be avoided.

“I never really drive after curfew because I never really need to. If I am at someone’s house past 11 o’clock, I will sleep over,” said Andrew Accardi ‘11.

Although teen drivers control the wheels of their cars, their parents control the ability to enforce or neglect the laws. While some parents decide to make their children follow the laws, others choose not to.

“My mom lets me drive after curfew because she knows that if I did not drive I would probably make her come pick me up from wherever I was. She trusts me more to drive myself than someone else,” said Kara Tricarico ’11.

The Connecticut driving laws are set to protect drivers from possible dangers on the roads. However, following them is entirely in the hands of the drivers themselves, but they still may face the consequences.