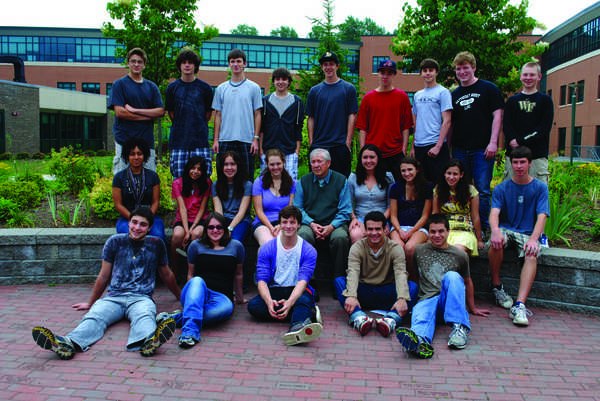 VALE, MAGISTER: Magister sits with his Latin 2 class in the courtyard. | Photo by Madeline Hardy '11

On June 24, some Staples teachers will leave the building for perhaps the final time.

Three teachers, two paraprofessionals, two secretaries, and a guidance counselor are all retiring before the 2010-11 academic year.

“I feel very grateful, and am hopeful that I have made a difference in the lives of these students. When people learn Latin, they are on the road to success as human beings,” said Latin teacher Daniel Sullivan who has taught at Staples since 1983.

Sullivan, who is referred to as “Magister” by his students, is renowned for his unorthodox teaching style. The goal of his educational philosophy is to build self-motivated students by focusing on self-reflection in class and individual work at home.

“Magister teaches Latin in a reflective and student centered manner. He teaches what Latin means today, what it meant in the past, and what Roman society is about,” said World Language Department chair Victoria Mazzarelli.

Students are equally appreciative of Sullivan’s uniqueness. “Magister teaches us in an empathetic style that touches our hearts and minds,” said Latin I student Joe Greenwald ’13.

The consensus among the retiring teachers is that Staples is an amazing school to learn in, as a student and a teacher.

Special education teacher Deborah Green, who is retiring after 32 years at Staples is one of many who will be sorry to leave.

The feeling is mutual; Staples faculty members described how much Green means to them.

“Ever since we were neighbors in the old Staples Deborah has been a mentor and a friend. I will miss having a trusted confidant at school, who inspires me and never fails to check in on how I’m doing,” said French teacher Casey DeVita.

Paraprofessional Rosemary Fabrizio, who is retiring after having taught at Staples for 14 years has “gained insight into young people.”

Secretary Lyn Birkmaier has worked at Staples since 1971 , a number of staff had nothing but great things to say about her lengthy tenure. “She was a wonderful secretary, always helpful, professional, and cheerful. She has been an institution at Staples, and we are going to really miss her,” said Lisabeth Comme.

Chris Radler, English teacher, echoed Comm’s comments. “Always helpful and has an answer for all your questions.”

Secretary Nancy Foote, who is herself retiring, has fond memories of Birkmaier and her other co-workers. “I’ve loved every single day. I’ve made lots of friends, and I love this staff,” said Foote, who has worked at Staples since 1999.

English teacher Holly Sulzycki, one of many who will miss Foote, refers to her as a staffer teachers see two or three times a year bescause she knows the inner workings of the school.

“She’s the go-to woman. If she doesn’t know something, she finds out, always with a smile,” said Sulzycki.

Teacher Liz Olbrych, who worked with Foote with various clubs, described her as “nice, helpful.” Olbrych said, “she’s right on anything you need. She is also a very positive person to work with.”

Like Foote, Guidance Counselor Jack Quinlan admires Staples’ staff, having worked at the school for the past six years after spending 27 years in another school district.

“It has been an absolutely great experience…to be associated with such top professionals,” said Quinlan.