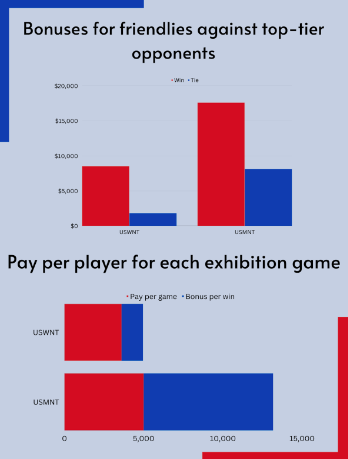 Despite higher levels of success and bringing in more revenue, the USWNT received significantly less bonuses for friendlies against top-tier opponents, as well as less pay per player for each exhibition game.

The fight for equal pay has been an exhausting and long process for players on the U.S. women’s national soccer team (USWNT). However, the historic signing of a new collective bargaining agreement (CBA) marks a major turning point for the future of women’s sports. Representatives of the U.S. womens and mens national team along with the U.S. soccer federation officially signed the CBA following the USWNTs 2-1 win against Nigeria on Tuesday, Sept. 6.

The major terms of the CBA include equalization of FIFA World Cup prize money, identical appearance fees, commercial revenue share and equal working conditions. Prior to this agreement, there were many instances where the men were unfairly paid more. The USMNT has consistently enjoyed significantly higher bonuses than the USWNT. They received $9.38 million for every World Cup win compared to $2.5 million that the women received. For friendly games, the USWNT would receive a $8.5 thousand bonus against top-tier opponents, while the USMNT would receive $17.6 thousand.

When it comes to U.S. soccer, there are zero reasons that women should be paid less than men. A commonly recited excuse for the disparity is that women’s sports generate less revenue than men’s sports, however, this is simply untrue. According to U.S. soccer’s audited financial statements, from 2016 to 2018, women’s games generated about $50.8 million in revenue compared with $49.9 million for the men. It doesn’t stop there. In 2019, USWNT jersey sales outperformed all U.S. soccer jerseys. According to ESPN, “Nike said in its earnings report that the women’s 2019 stadium home jersey is now the No. 1-selling soccer jersey, men’s or women’s, ever sold on Nike.com in one season.”

Additionally, compared to the U.S. men’s national team, the women’s team has proved far more successful in their record. Since their first international match in 1985, the USWNT has won four World Cup titles, four Olympic gold medals, nine Concacaf gold medals and maintains a ranking of number one in the world. Since the USMNTs first international match in 1916, they have won only seven Concacaf gold medals. This isn’t to put shame on the men’s team, but simply to point out the inequality of it all. Women are paid less not because they generate less revenue or viewers, but because of sexism.

In fact, in 2020, former United States Soccer Federation President Carlos Cordeiro resigned after receiving heavy, and well deserved, criticism for misogynistic remarks defending the inequity. Cordeiro argued that the men face more competition, which requires a higher level of skill than a female player does. This archaic thinking was the basis of the USSF argument in the gender discrimination lawsuit brought upon by the USWNT in early 2019.

This is something that many female athletes can relate to. Even as an athlete in high school, I’ve seen, heard and experienced sexism surrounding women in sports. From being told that women will never be as good as men to practicing and playing on worse fields than the boys. These inequalities are carried into almost every aspect of women’s sports, no matter the age.

Although it may sound cliche, this CBA represents the idea that hard work does pay off. My hope is that in the future, all womens sports will be not only seen as but treated as equal and that this deal inspires others to fight for what they believe in.