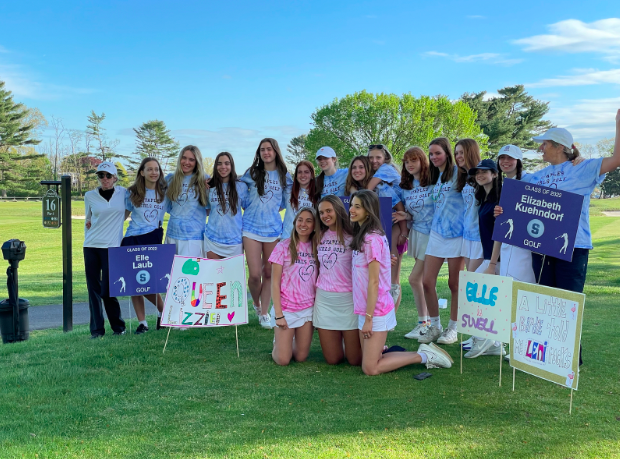 The girls’ golf team has members from every grade; each player has different strengths that have helped contribute to the team’s victories this year.

The girls’ golf team is currently number one in the state and has a record of 8-1, with their sole loss being by a difference of only three strokes.

“Consistency and a good mix of players, I think, is contributing to our winning streak,” co-captain Lizzie Kuehndorf ’22 said. “The girls on varsity have been playing since freshman year on [the team] so everyone is comfortable and has had good practice at playing in these matches.”

The team, with varsity and junior varsity (JV) combined, contains 26 players. It is the largest in the group’s history.

“This is the most talented team since 2015 when we were division and FCIAC champions and finished third in the state,” Head Coach Patty Kondub said. “What has changed is the dedication of our players to practice hard on their own, take lessons and play in tournaments during the off season.”

With seven matches left to play, the team hopes to win the FCIAC and state championships in early June and are working toward making it to the national championship.

“State champions are invited to the national championships in Pinehurst, NC,” Kondub said. “We would be the first Staples golf team to compete at that level. We have the talent.”

Kuehndorf has been on the team since freshman year and feels that it is not only skill that contributes to their wins, but the community the team has created together.

“ [We make] sure everyone is having fun during matches and [help] the incoming players new to varsity or JV to feel comfortable,” she said. “The golf team is really like a family, and we all play well if everyone is rooting for each other and has good team spirit.”

While the team has been successful in almost all of their matches this year, they still make sure to stay concentrated in order to continue their almost-perfect winning streak.

“Keeping your focus is the most important aspect of golf, especially when you are beating other teams by 40-60 strokes,” Kondub said. “We concentrate on our own game and take it one stroke at a time.”

Because of the large number of members on each team, the varsity and JV groups help each other out when needed if there is any academic conflict.

“Our team is very academic, so the AP testing schedule and finals were in the way of some of the matches,” Kuehndorf said. “We worked around it [by] having JV players step in and help the [varsity] team when others couldn’t make it.”

When asked what drives the team, Kondub said that for them, it is simple.

“The results keep us motivated,” she said. “It’s pretty simple with this talented team. […] [It’s] a Dream Team.”