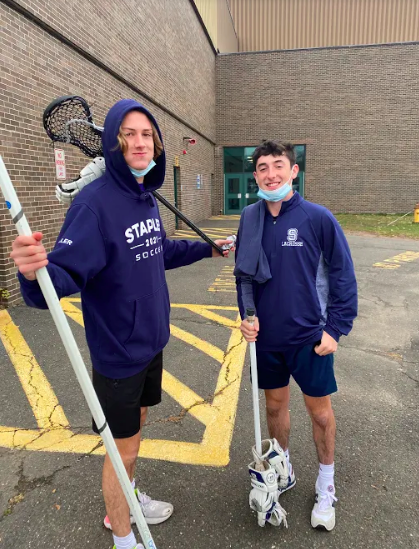 The Staples boys lacrosse team ended their season 14-4. They made it to the FCIAC championship but lost against Darien. They are working hard to make sure they see different results this coming season.

For some teams, the off-season is a time when players can relax, mentally prepare or plan potential tactics for the upcoming season. For the boys’ lacrosse team, however, off-season has a different meaning.

The offseason for boys’ lacrosse is packed with various preseason practices and is far from a time of relaxation. Their preseason schedule consists of workouts, captains practices, wall balls and weekly meetings.

“I feel really strongly about our off-season program,” Charlie Howard ’22  said. ”We will be able to hit the field running as soon as the season starts.”

Although they fell short in the first FCIAC championship in program history, they are confident this season will have a different ending.

“We all have two main goals: to win the FCIAC and to win the state championships,” Carter Gay ’21 said.

They are hoping to achieve this by working as a team unit.

“We harp on good attendance, so everyone can play against one another, and workout with one another to really push each other,” Gay said.

They believe that the more they play, the stronger the team will be.

Their rigorous schedule is preparing them to the best of their abilities, pushing them to stay determined and put in hard work for good results.

Scott Kosakowski ’21 is getting ready to defend the net for this upcoming season.

“For preparation we are getting as many shots, playing as much lacrosse as possible, and off season lifting,” Kosakowski said.

The boys lacrosse team isn’t slowing down, and this new schedule will continue until their pre-season begins.

“If we keep up the hard work, “ Gay said, “I have a good feeling about the season.”